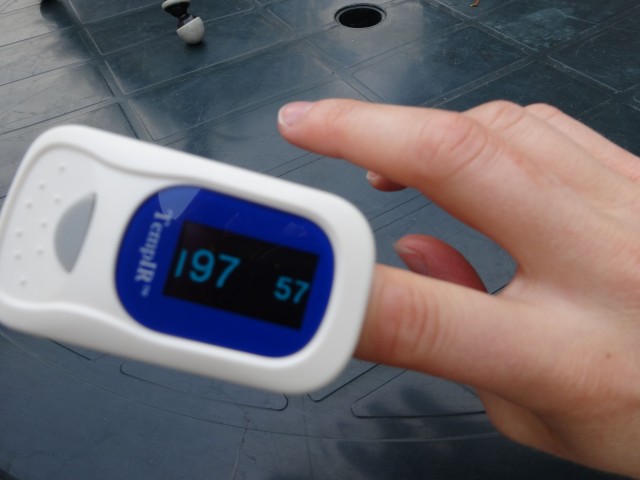 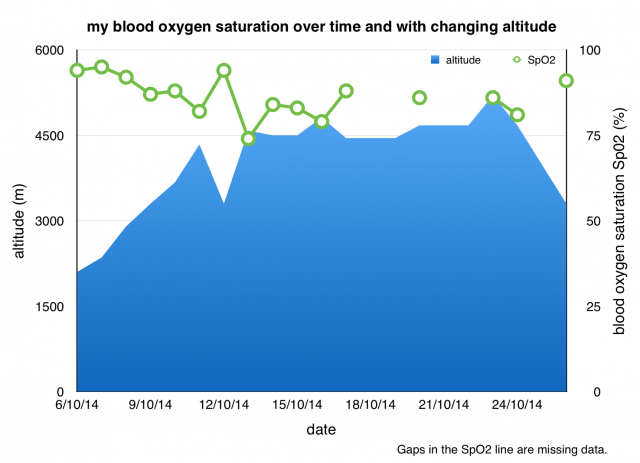 I’ve recently been looking over the data I took while on expedition to Putha Hiunchuli in Nepal.  The plan was to take some data and do some experiments looking at basic science in the mountains, particularly around issues that affect climbers.  The main topics were:

Alongside Anturus I am making some videos as educational resources, but here are some first results. 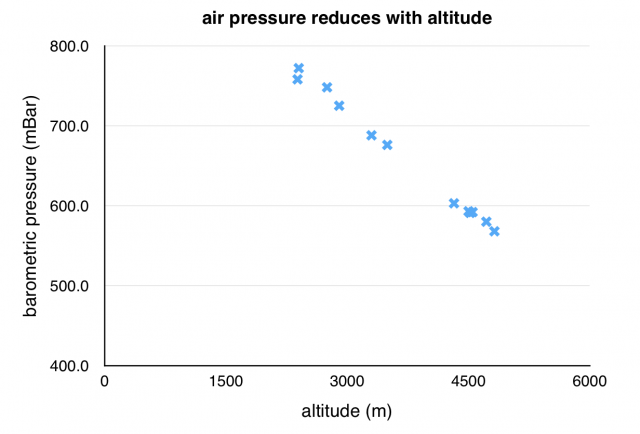 Air pressure reduces with altitude.  That is, the mass of air pushing down on us is less as we go higher.

To look at the effect of this, I did something we do every day – I boiled some water.  We all know that at sea level water boils at 100 ºC, but look how this changes as we go higher. 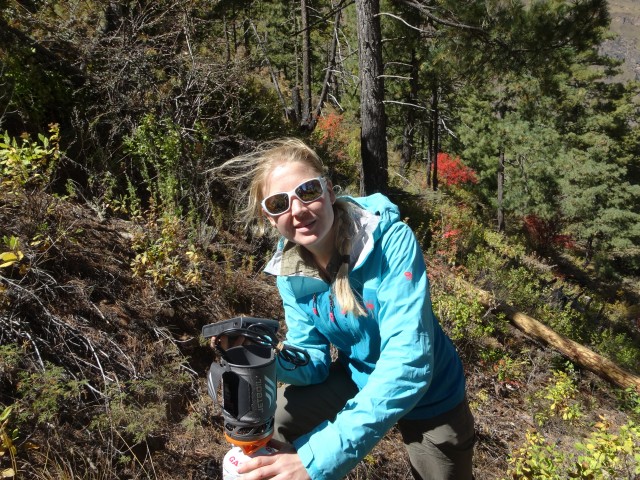 Above is a picture of me with my Jetboil and my data logger up at 3675m measuring the temperature at which the water was boiling. 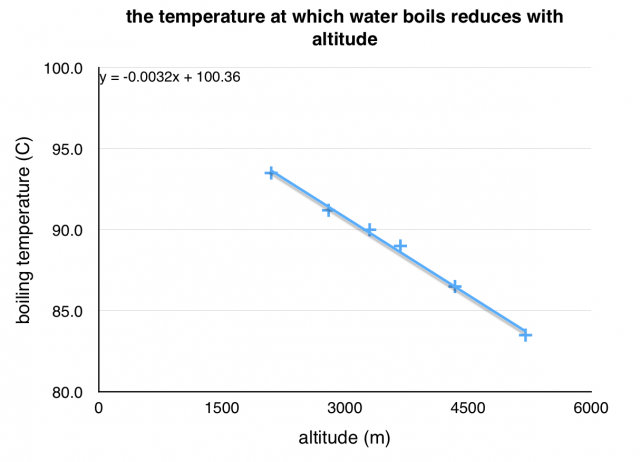 The temperature at which water boils reduces with altitude because the air pressure reduces.

Liquids turn into gases when they are heated because that heat energy is transferred to the particles of the liquid and causes them to move faster. When they are moving fast enough, the particles near the surface can escape into the air and become a gas. When a lot of liquid particles are escaping and the temperature stops rising we say the liquid is boiling.

The way that water boils at a lower temperature is a demonstration of the affect of this lower air pressure. It can be a problem for climbers because they need to rehydrate their instant mountain food using boiling water. Water at 80 ºC doesn’t rehydrate food properly.

However, this reduced air pressure at altitude has a much more serious effect on the climber’s body – reduced oxygen.  I’ll show some results on this in the next blog. 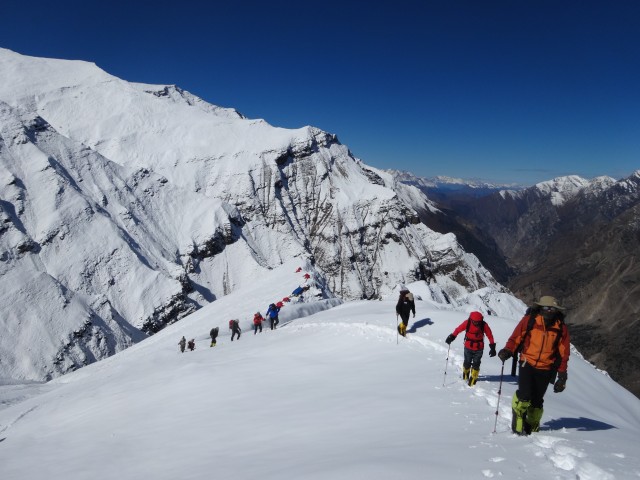 The team stretching their legs after two sedentary days snowed in. Our Pangi ridge camp is in the background.

I just arrived home from Kathmandu yesterday evening after a month in the remote Dolpo region of western Nepal. Nine of us plus guide and sherpas were attempting to climb Putha Hiunchuli (7246m).

Being home for such a short time, I’m struck by the juxtaposition between my life here and what I’ve been living for the past month. I thought I had masses of stuff out there – two full duffel bags and a bit extra in a rucksack. But I’ve come home to a shelf full of makeup, boxes of stilettos piled behind my bedroom door, kitchen cupboards full of different shaped glasses and variously-patterned mugs, and I almost miss the simplicity of a face-wipe and a metal cup. It has happened before. These superfluous things will soon become normal again.

Besides readjusting, I am able to reflect on the expedition. It was not a success in black-and-white terms. We didn’t summit Putha Hiunchuli – we didn’t even come close, not even making it to base camp – but I don’t feel disappointed despite the implications for my future plans in not having attained the altitudes, and thereby gained the experience, I would have liked. The expedition was a success in that as team we walked into a remote region, dealt with various surprises and issues that befell us and remained safe, well, happy and unified.

We were caught up in a cyclone that unfortunately caused several casualties in Nepal. But we had up-to-date information and strong leadership and we set ourselves up somewhere safe, at the top of the ridge above Pangi Camp, out of the main avalanche risk area. We were snowed in at 4500m for several days. The snow was deep and impassable to the yaks that usually carry expedition equipment to base camp. We couldn’t get up, but equally there were others there who couldn’t get down.

I summarised our predicament to the tune of the Bee Gees Tragedy, which will serve here as an unofficial trip report.

At this level we can’t expect all our expeditions to result in a summit. There are too many factors that need to come together and many are out of our control. Failure always teaches us something, but I don’t even think of this as a failure. It was a beautiful experience. And I’d like to thank my entire team – westerners and Nepalis alike – for inspiring, supporting and amusing me for the past month. I will miss you. 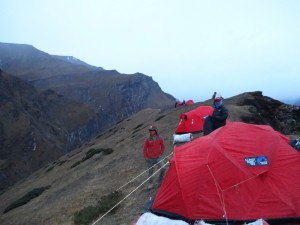 The ridge when we arrived, just before the storm. 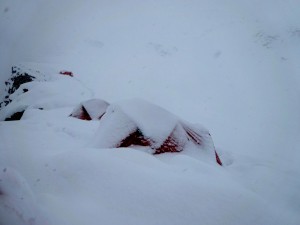 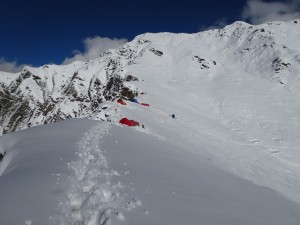 The ridge after the storm. 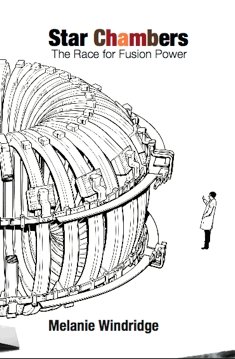 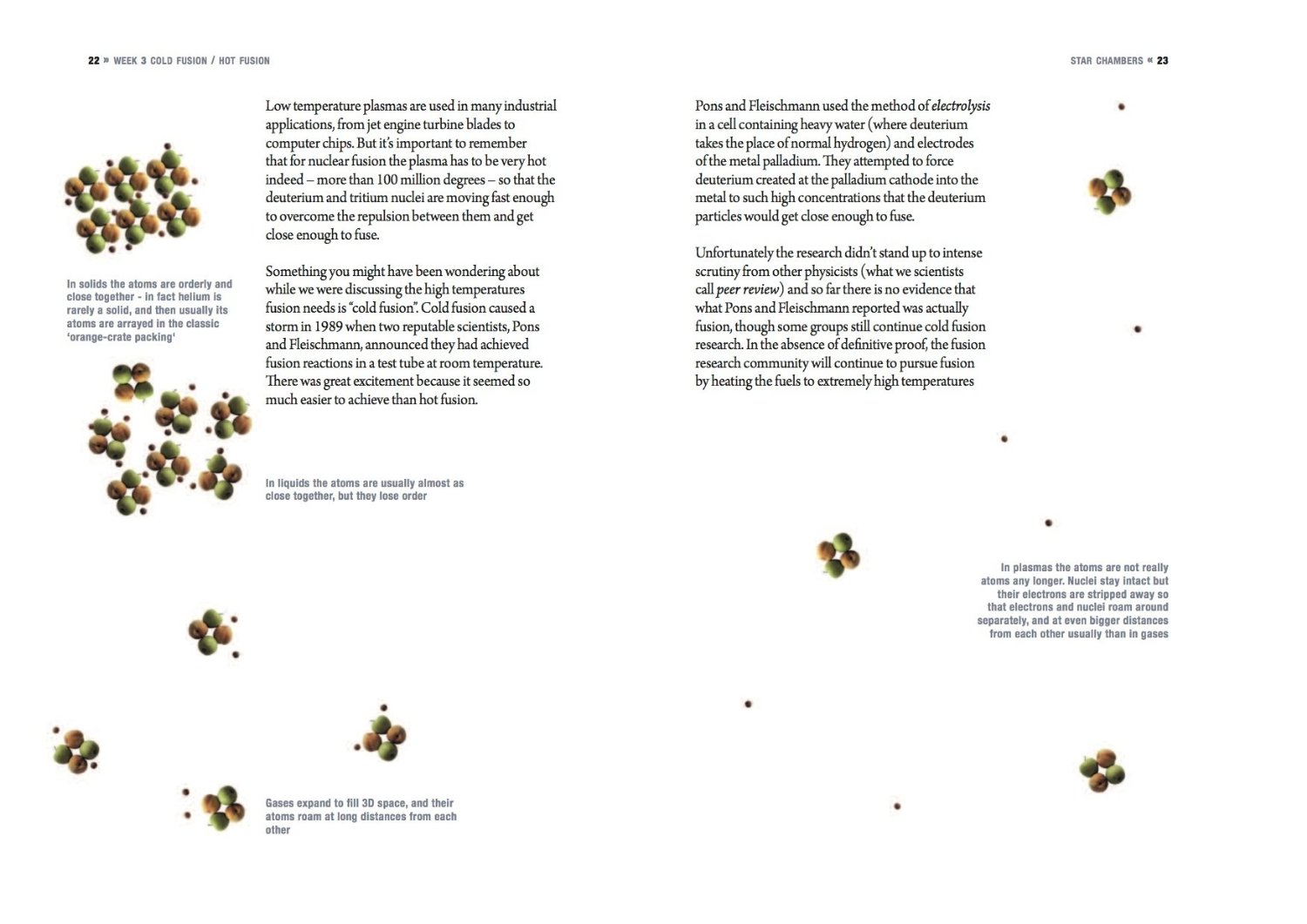 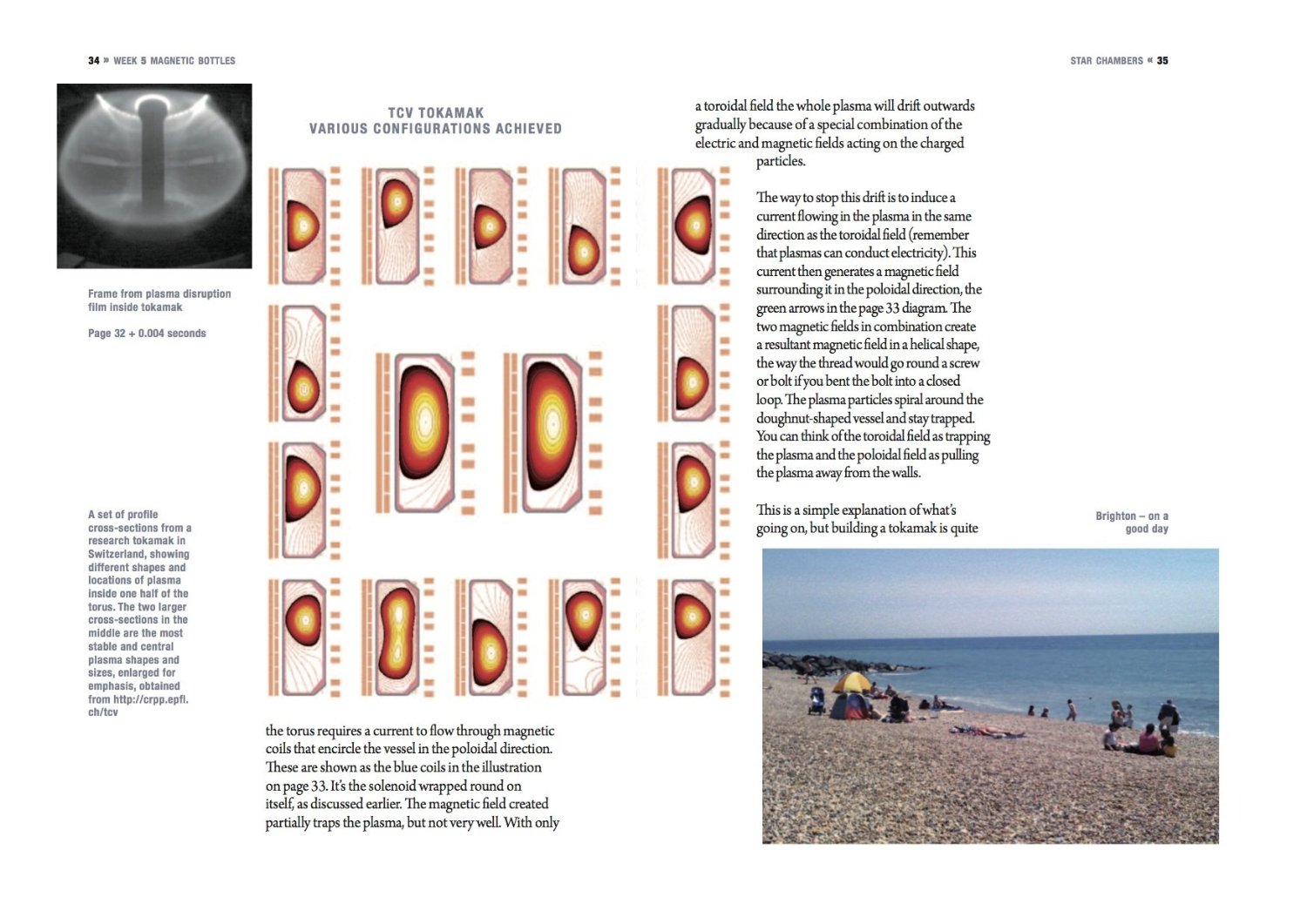 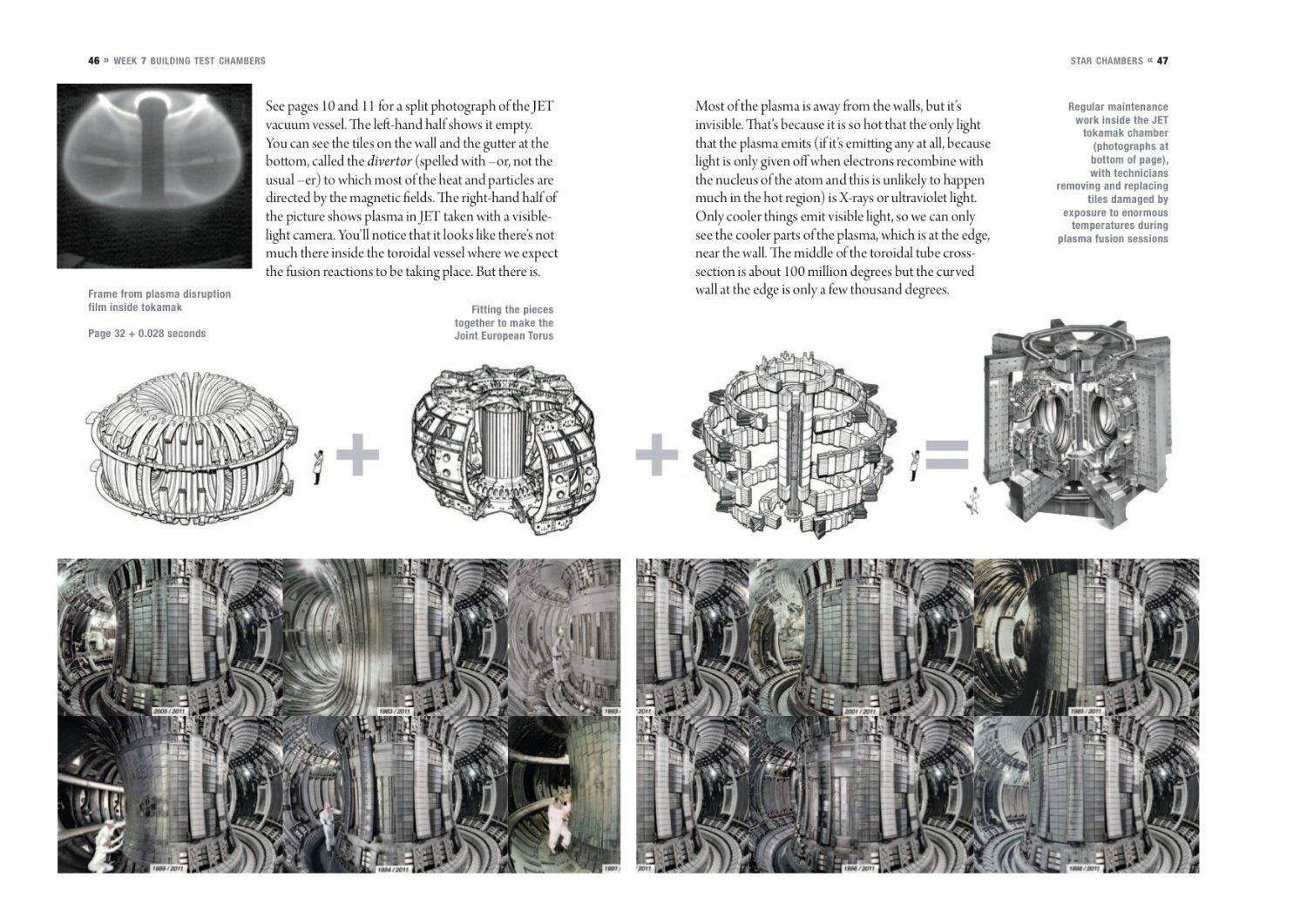 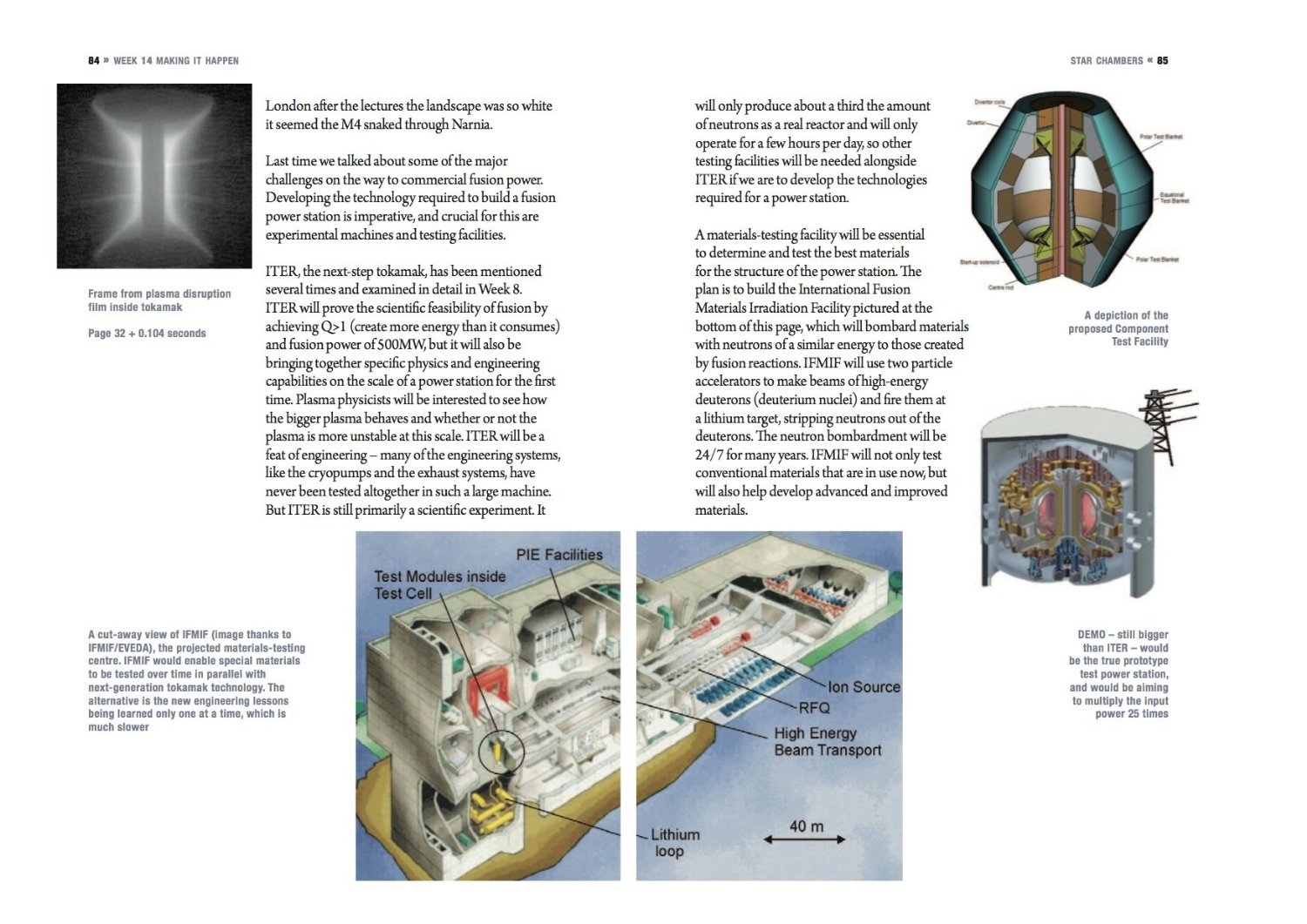 Star Chambers, published by White Label Books, is about nuclear fusion and gives a basic introduction to fusion for energy for the general reader.  The book is based on the blogs she wrote as the Institute of Physics lecturer in 2010 and includes additional chapters, new pictures and a Tokamak Top 10 of some of the world’s best fusion machines.

“This is one of the most stimulating new books I have read and will be enjoyed by the general, interested reader also, as it gives an excellent overview of the subject.” – ASE School Science Review, Mar 2014

See videos and demonstrations from the lectures and book.

See the book on Amazon.co.uk