Having climbed between 5000m and 6000m a few times with no problem, I wanted to see if I could approach 7000m too. Could my body deal with the high altitude and could I mentally deal with the rigours of expedition life? Last year I tackled both these objectives on a trip to Putha Hiunchuli in the Himalayas (see my Mountain Science page and blogs) but unfortunately due to Cyclone Hudhud we never reached Base Camp or climbed beyond 5000m, so I gained no new knowledge of my possible performance at altitude. However, I did gain some good expedition experience and had a wonderful time. But I decided to attempt Aconcagua this year as a more logistically-secure way of attaining 7000m.

I climbed with Jagged Globe in a team of nine plus a UK guide, Becky Coles. The itinerary was straightforward: walk to Confluencia camp (3400m) and spend three nights, making acclimatisation walks during the days; walk to Base Camp (4700m) and spend six nights, making acclimatisation walks; then make the summit push up to Camp 1, Camp 2, then Camp 3 and summit. Easy. 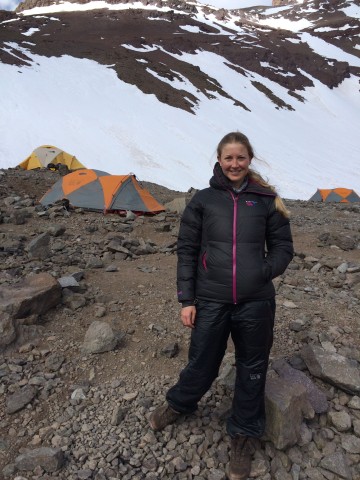 The days progressed well. Everyone reached base camp fine and happy. In the acclimatisation walks we summited Bonete Peak (5050m) and carried some small loads up to camps 1 and 2 for later. We enjoyed beautiful views of Aconcagua, especially in the evenings when the sky glowed pink. We bonded in the mess tent, sharing stories and watching films on one of the team’s iPads. Then the weather turned. We had mists and snow at Base Camp on rest day. But the next day was clear and we walked on up to Camp 1. 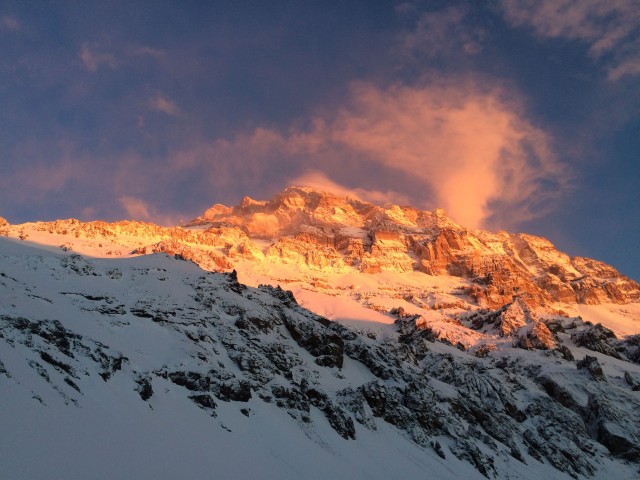 Aconcagua in the evening light. 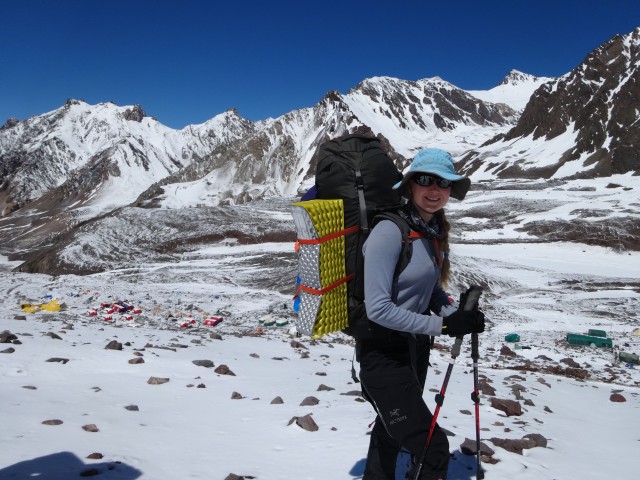 Walking from Base Camp to Camp 1. Base Camp in the background.

We had snow in the afternoon at Camp 1. It blew in as we arrived and we settled into our tents, but it was gone by the time we emerged for a dinner of hamburgers at 5000m, eaten sitting on cold rock looking out over a wide and incredible view. Similarly, the following day, the snow blew in as we were arriving at Camp 2, but it didn’t blow out so quickly. 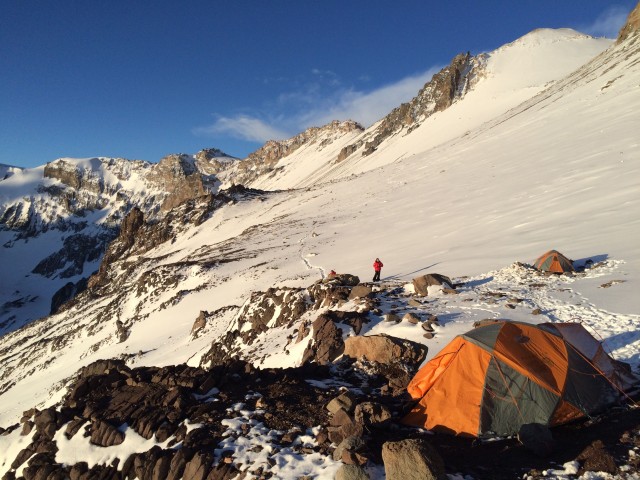 The next day we were mostly confined to the tents as the wind and snow spun around us. I felt lethargic and heavy, my body finally succumbing to the altitude. We went for a short walk down the hill and around camp, our bodies bundled up against the wind, but I was happier in my tent. Going out was an effort. Just opening the zip let in a flurry of flakes; digging boots out of the piling snow in the porch froze fingers; squatting by the tent for a quick wee was a chilly relief, but walking to the big rock 30m away that served as a loo screen was a mission. 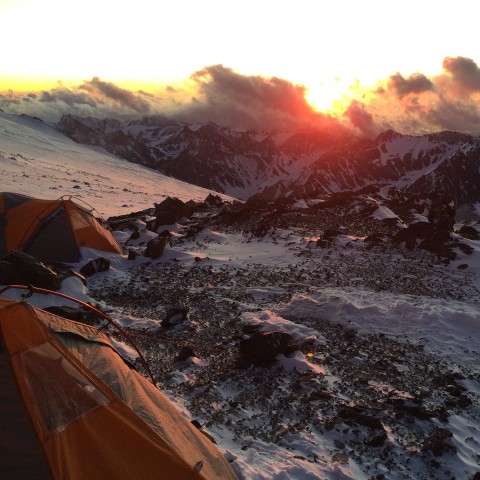 We spent two rest days at Camp 2 awaiting better weather. The altitude and poor conditions took their toll and three of our number went down. But by the end of the first day my body was acclimatising and I felt better. Not perfect (the loo trip was still a mission), but better. Then the guides, Ilan, Mauri and Becky, told us that the winds were forecast to drop slightly and we may have a chance to summit. The next day we would move to Camp 3 and try for the summit the following day if the weather allowed.

The weather was kind. We awoke from an initially windy night at Camp 3 to a calmer morning. Laboriously we ate and dressed, putting on all our warm layers – several merino base layers, fleece, puff, down jacket. I put on my inner boots, then my helmet and goggles, before fighting my outer boots on and finally emerging from the tent. A final fumble with gaiters and crampons and I was set. It was 7:30am – a relatively late start but a wise call from Ilan who saw the possibility of getting too cold too early in the morning. We left in sunshine and were graced with its warmth for most of the day. 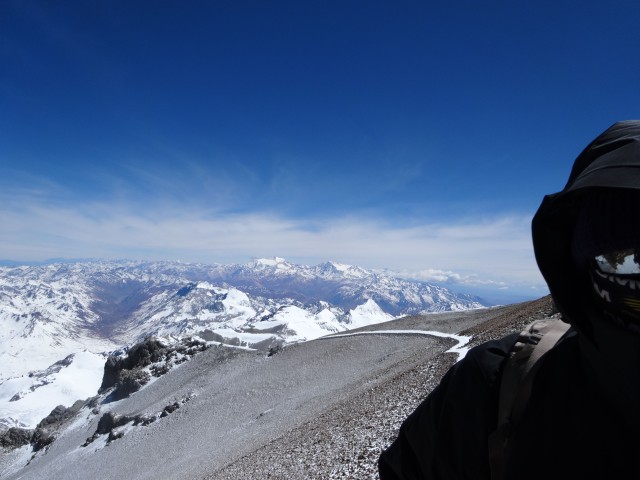 Hugh wrapped up warm on a beautiful summit morning.

It was a hard walk. It hurt right from the beginning, the body demanding more oxygen than could be inhaled and the lungs fighting to deliver. I leant heavily on my poles and settled into my usual spot towards the back of the group. Slow and steady. Even slower and even steadier today. The group split. Several times early on summit day I didn’t know if I could make it – if I would be too slow or the weather would change or I would be turned around. But Mauri, the guide, reminded us to smile and enjoy the view (as best we could under the circumstances), and I plodded onwards, finding my rhythm.

As the day progressed I felt more hopeful. We were making headway. And I felt strong – not my lungs, of course, which were still sucking frantically on the thin air, but nutritionally and mentally I could feel I was solid. It was as if I was in two parts, one feeble and one robust. It hurt, but it was bearable. All I had to do was keep going.

I reached the summit with Martin and Becky after 8 hours of climbing, one hour after two faster team-mates, Andy and Oli, summited with Ilan. They waited for us on the summit and it was wonderful to stagger up there to congratulatory hugs and team celebrations. There were smiles of happiness and relief. 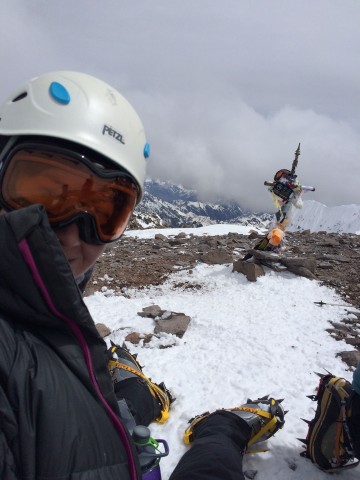 Sitting at the summit.

We went down to a wind-battered night at Camp 3, a steep, quad-crunching decent to Base Camp then a vast, dusty walk-out before we finally made it back to Mendoza a long two days later.

As usual in the mountains, I had a great time. Admittedly it wasn’t always easy – some bits were awkward or tiresome, some bits downright hurt. I am, of course, pleased that I did what I set out to do, and that my body adjusted sufficiently to allow me to do it. The satisfaction is just setting in.

Thanks to the guides – Ilan, Mauri and Becky – and the rest of the team for a great expedition. 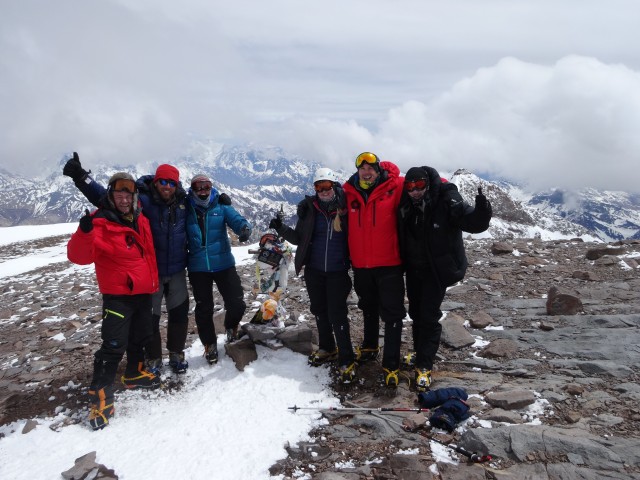 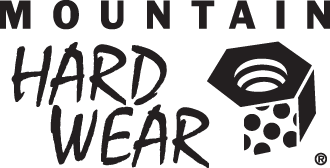