I have recently been out skiing across Svalbard.  The trip was more intense – more brutal – than I could have imagined.  I realised that out there everything becomes about survival and nothing else matters. 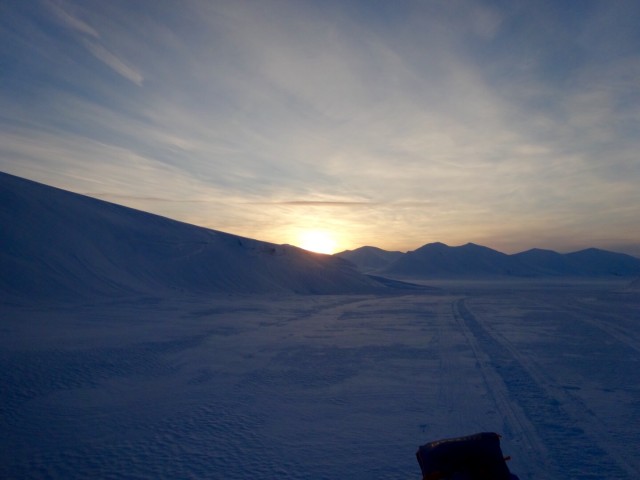 Two of us – just me and a guide – went out for a week, crossing over towards the east coast where the influence of the Gulf Stream does not reach and the temperatures fall by as much as ten degrees. I wanted to see the northern lights in the way latter day explorers would have done, to experience the landscapes and the conditions.  I did.  And I can tell you now that if you have never done it you will never really understand. But I will try to explain.

It started relatively easily, with the temperatures a manageable -20C or so, but steadily descended into the late -30s where doing anything became a huge effort.  We found out on our return to Longyearbyen that this particular week Svalbard experienced the lowest temperatures for the last five years.

We had packed the sledges carefully for the expedition.  We each packed our sleeping mats and sleeping bags together in a bedding bag. Inside we put everything we would need inside the tent – warm clothing, toiletries, clean socks, head torch, as well as things we might need easy access to like goggles and extra hats or gloves for bad weather. In the bottom of the sledge we packed the food.  For each day we had bagged up individual portions of porridge for morning and a dehydrated meal for evening. For snacking during the day we had a large mixed bag of nuts, dried fruit, chocolate, biscuits and pieces of protein bar.  This would act as lunch as well as snacks.  Whilst skiing it is too cold to stop for long meal breaks, just for a quick drink and a snack.  As well as the food I had a large 5L bottle of fuel, two small fuel bottles for the burner, the burner and pan.  I also had a shovel, the flare gun and the rifle.  The guide had some more fuel and the tent, and he also had a revolver in a holster on his harness for easy access in case of need of defense from polar bears.

The first day we took a taxi from Longyearbyen around 9:30am and drove out to Bolterdalen, a small branching valley not far up the main valley from Longyearbyen. When we got out of the taxi it was windy and cold, so we started skiing almost immediately to keep warm.  The light was very flat and the sky on the grey side of white.  The landscape there was predominantly ice, very windswept ice.  Snow that had fallen was quickly swept away by the wind.  Some lay collected in small dips or gullies, like puddles of snow rather than water.  In other parts, between the puddles, there was hard snow crust, which was the easiest to ski on because the friction on the sledges was less than in snow.  The hardest was the sheet ice where there was no grip.  We picked our way up the valley, trying to stay mostly on crust. It started off quite gently but gradually the path started climbing and became snow rather than crust.  The effort intensified.  On steep sections we had to take off the skis and haul our sledges up on foot.  At one point we were passed by about 10 dog teams, and also by a line of snow mobiles.  We waved and kept skiing onward.

That first night we camped just over the high point of the climb and the following day dropped down into the wider Reindalen valley and headed east.  From then on we didn’t see another person until we were returning back this way.

This blog was first published on the International Year of Light UK website on 6th March 2015 as Notes from the North – Part 2. Read Part 3.

Plasma physicist and adventurer, Melanie Windridge, is on an expedition to the frozen wilderness of Svalbard to witness the northern lights. In a series of letters, she shares her experiences as she walks in the footsteps of the earliest polar explorers and battles the elements in pursuit of science. In her second post, Melanie starts her journey across inhospitable terrain and faces the reality of the journey she is undertaking.

Read part 1 of her adventure