Recently I read an article by the World Economic Forum entitled, What to expect when the Earth’s magnetic field goes into reverse.

It’s interesting because the aurora is caused by the interaction of the solar wind with the Earth’s magnetic field (see Aurora Info if you need a quick summary), so if the magnetic field changes the aurora will change too. But how? And firstly, when might this happen?

There are two different theories – one that says a reversal is imminent and one that says not. But Matthias Morzfeld and team at the University of Arizona’s mathematics department say there is no need to worry. 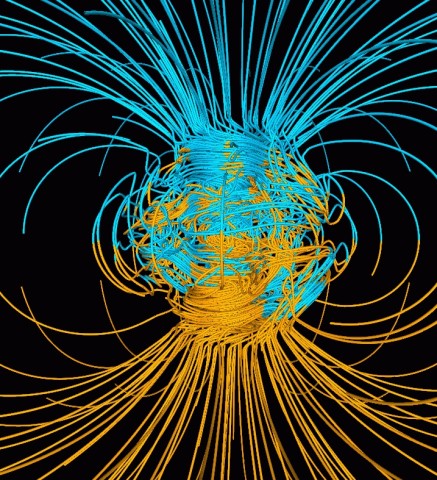 They used simplified mathematical models combined with geological data from rocks, which gives information on the Earth’s magnetic field up to 2 million years in the past. They built a mathematical model that is good at ‘predicting’ events in the past, so they used it to make predictions about future field reversals. Read more about the study in this article for the World Economic Forum.

Matthias Morzfeld said, “According to our calculations, there is no need to worry about a reversal for the next 4,000 years.”

Thinking about what would happen to the aurora during one of these reversals, I wrote and asked Matthias whether his study of past events has given any indication of how long it takes for the reversals to happen:

“Our study has not revealed any new insights about how long it takes the dipole field to reverse. Looking at the data record, going from one stable dipole configuration to the next takes a few thousand years (4-8 thousand). While the system reverses, many very quick reversals can be exhibited, this is documented in sediment data. Such short reversal can occur within a few hundred years. To be sure, these are different from what one thinks about as a classic reversal, these are more like “jittering” while the system reverses.”

Then I wondered whether, during the “jittering” processes over 100 years or so, the magnetic field would decay to northing, or just move around more erratically whilst maintaining the same strength. Matthias replied:

“As far as I know nobody knows what the field looks like during a reversal. It could dissapear, or it could change shape: collapsed dipole may yield a quadrupole field (with two north and two south poles).”

Gary Glatzmaier has done work on modelling field reversals and has made simulations of how the magnetic field of the Earth could look during a reversal, as shown below.

If the poles move around a lot, it could mean that we see aurora in locations where we wouldn’t normally see it.

Dr Jonathan Nichols, researcher in planetary aurora at the University of Leicester says,

“it’s unclear how the Earth’s magnetic field changes its shape as it flips from one polarity to the other, so we don’t quite know what lies in store for aurora hunters of the distant future. Computer simulations suggest that we may expect similar arcs of auroras as we now see but the shape would be different, depending on the exact shape of the field. So, we might have a case in which there are secondary auroral ovals in the sub-tropics, or the auroral displays might take the shape of a four-leaf clover over each hemisphere. In any case, it’s fascinating to imagine auroral displays lighting up the skies above gently-wafting palm trees!”