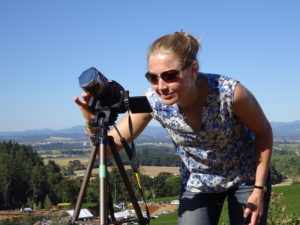 A total solar eclipse is a fascinating and beautiful phenomenon and creates unique conditions for scientific measurement. But what exactly is it?

What is a total solar eclipse?

A solar eclipse occurs when the Moon passes between the Sun and the Earth, blocking the light of the Sun. How, precisely, they line up determines the type of eclipse we see – a partial, total or annular eclipse.

It just so happens that the Sun, which is about 400 times bigger than the Moon, is about 400 times further away, so these two celestial bodies appear about the same size in our sky.  Because of this, the disc of the Moon is able to entirely obscure that of the Sun if they line up exactly.

The orbit of the Moon about the Earth is an ellipse that is very nearly circular, but that slight stretch of the orbit means that there is about a 12% difference between the closest and furthest distances of the Moon from the Earth. When the Moon is closest it appears larger than normal – a supermoon – and when it is further it appears smaller.

The Moon’s distance between Earth and Sun is such that its diameter appears about the same as the Sun’s and so completely blocks our view of it.  With the bright disc of the Sun obscured we are able to see the wispy atmosphere of the Sun, called the corona.

The Moon is further from Earth than normal, appearing smaller, so that it doesn’t fully obscure the Sun. An annular eclipse shows as a bright ring around the Moon’s edge as the Moon moves between Earth and Sun.

The planets are not perfectly aligned and so the Moon only crosses part of the Sun.

Although the Moon orbits the Earth every 29.5 days, we don’t see an eclipse every month. The Moon’s orbit around Earth is tilted with respect to the Earth’s orbit around the Sun by about five degrees, so they don’t line up exactly – they cross. About twice a year the orbit planes will cross and an eclipse can happen somewhere on Earth. 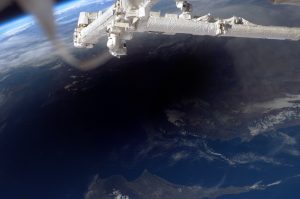 Solar eclipse, as seen from the International Space Station over Turkey and Cyprus. The shadow is centred at approximately 36°42’54″N 32°18’58″E. Credit: NASA

A particularly interesting total solar eclipse occurred on 29th May 1919: scientists Arthur Stanley Eddington and Andrew Crommelin viewed this eclipse from Príncipe off the coast of West Africa and Sobral in northern Brazil to prove Einstein’s theory of General Relativity.

Einstein’s theory predicted that gravity was distorting spacetime and so would bend light in the same way that it bends the paths of bodies made of matter such as a ball or a planet. Eddington and Frank Watson Dyson, who remained in England to coordinate, had realised that the only time that the Sun’s light would be blocked enough to see the stars and so test Einstein’s theory was during a total solar eclipse.

Their measurements were conclusive. When the Sun was in the way, the position of the stars appeared different to when the Sun was not there. The Sun’s gravity was distorting the light that reached Earth, just as Einstein had predicted. The 1919 confirmation of his theory made him a celebrity. 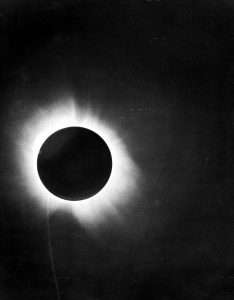 A half-tone reproduction of one of the negatives taken with the 4-inch lens at Sobral showing the position of the stars. Credit: F. W. Dyson, A. S. Eddington, and C. Davidson

There won’t be a total solar eclipse visible in Europe until 2026. If you can’t wait that long, it’s time to plan a trip to Latin America or Antarctica!

A total solar eclipse visible in parts of Chile and Argentina will take place on 14th December 2020. In Brazil and Uruguay, it can be witnessed as a partial solar eclipse.

Another total solar eclipse will occur just under a year later, on 4th December 2021. It will be visible in parts of the Antarctic Peninsula. For both you can plan special eclipse travel packages.

Learn more about the 1919 solar eclipse that proved Einstein right and ushered in the era of modern physics in Melanie’s Forbes article about the event.

Find out more about solar eclipses on Melanie’s blog Science at Extremes including stories about the eclipses Melanie has witnessed herself.

Have you ever witnessed a solar eclipse, partial, annular or total? Are you planning a trip to see one? In our blog, Science at Extremes, we share stories about the spectacular aurora, mountain climbs, polar adventures and more!  Often with a bit of science 😉 Get in touch if you’d like to share your eclipse story.