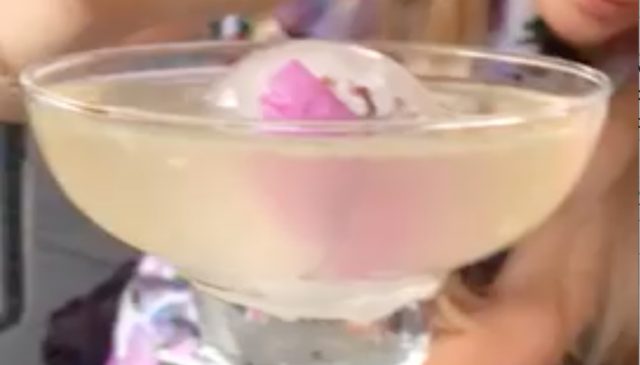 Interesting cocktail with a giant ball of ice!

Whilst on holiday I was served this rather cool cocktail with a giant ice ball plugging a hole between the upper and lower chambers of the glass. So – of course – we took a video of it as it melted and we wondered whether there was a link with glaciology. Well there is! I asked glaciologist Scott Watson for his thoughts.

In the video, you can see that the ice begins to melt slowly at first, but once you get a small channel seeping through then the warmth of the liquid melts the channel walls and it quickly enlarges, letting more and more liquid into the lower chamber.

On a glacier, meltwater forms ponds on the surface, which drain into the glacier through similar channels (called conduits), in some cases reaching the glacier bed. The walls of these conduits expand as the water flows through, similar to the accelerated melting in the cocktail glass.

More water at the bottom of the glacier makes it slide quicker over the underlying rock, so glaciers often move quicker in summer. You can see this in the figure below, which shows the summer speedup of Thulagi Glacier as it flows down from the southwest face of Manasalu in Nepal (Credit: Scott Watson).

Thulagi Glacier velocity in (a) winter and (b) summer.

However, the general trend is that Himalayan glaciers are slowing down because warming temperatures mean that more ice is being melted from the lower part of glaciers than is being replenished by snowfall in the mountains.

Climate change is causing an increase in the ponds of water on the surface of the Khumbu glacier in the Everest region. The ponds can eventually coalesce into a large glacial lake, such as Imja Lake which formed in the 1950s. This is worrying because glacial lakes can cause sudden outburst floods if water breaks through the debris and ice containing the lake. As the cocktail example shows, a little seepage can lead to runaway melting! 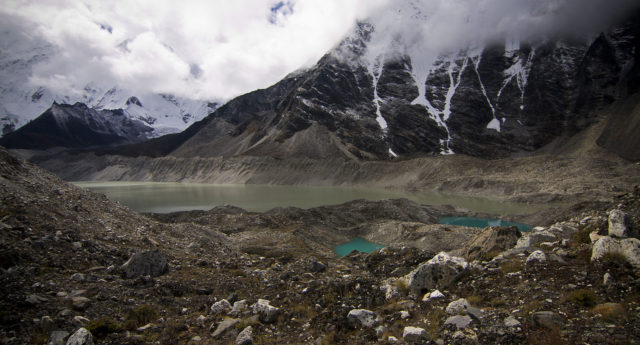 For more glaciology follow Scott Watson on Twitter @CScottWatson or visit rockyglaciers.co.uk
Let us know if you’ve seen any interesting glaciological goings on in your own cocktails!

What does my cocktail have in common with glaciology? September 19th, 2018Melanie Windridge
Tagged: Everest, glacier, science