This week I attended the World Extreme Medicine Expo in London.  It was four days packed with fascinating talks on subjects ranging from combat medicine and Medicins Sans Frontiers work with refugees and in warzones, to what birds can teach us about high altitude adaptation, and lots of other things in between.  At the same time there were practical workshops going on but – being a physicist rather than a medic – I stuck to the lectures.  One morning Ranulph Fiennes amused us with anecdotes from his adventures crossing both poles and circumnavigating the world North-South.  Then we skipped straight on to conversations with an astronaut (the wonderful Mike Barrett).

Here I am going to share with you a handful of practical tips that I’ve learned that might help you on your own adventures.

Falling in cold water
Information from a talk by Gordon Giesbrecht.

Often when people die in cold water the cause of death is given as hypothermia.  But that can’t always be the case.  On falling into cold (-6C) water, people don’t get hypothermia for about 30minutes, but many people die much quicker. 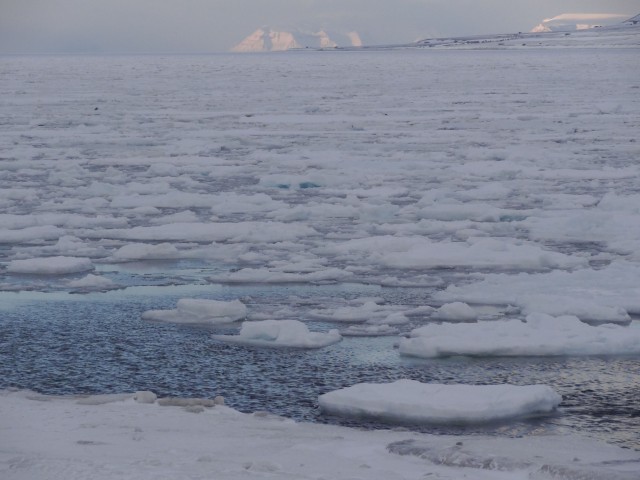 So if you’re not going to die instantly, how do you give yourself the best chance of survival?

Frostbite
Information from a talk by Chris Imray.

Firstly, try not to get frostbite.  It sounds obvious, but it can happen really quickly.  When I was camping on Spitsbergen, Svalbard, in February in minus-30-something temperatures, I got some frostbite blisters on the ends of my fingers in only a minute or two when I popped out of the tent to the loo.  It was the end of the week and holes had appeared in the finger-ends of my silk liner gloves.  A couple of minutes was all it took to get superficial frostbite. 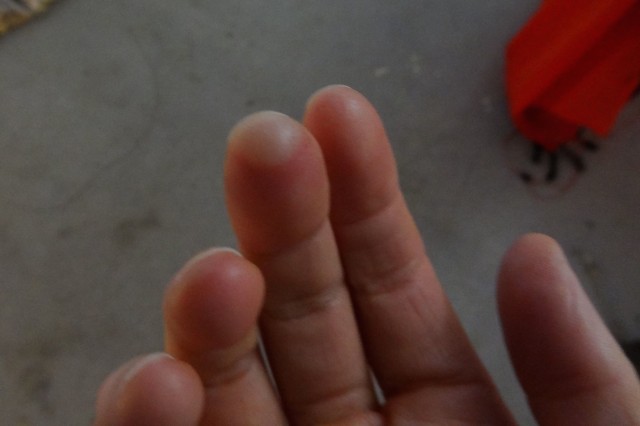 Only rewarm if there is no risk of re-freezing.  The thaw-freeze cycle is more dangerous than being constantly cold.  Chris Imray told a story about Napoleon’s doctor noticing that the officers often sustained more severe cold injuries than the ordinary soldiers.  He realised that it was because the officers sat closer to fire than the soldiers, so their frostbite was thawing then re-freezing.

Finally, think twice about amputation (duh!).  Always defer surgery.  If the injury has occurred in the last 24hrs there may be treatments that can help.  Seek medical advice (call home if you are abroad).

Heat
Information from talks by Sundeep Dhillon and Martin Hoffman

Here are some symptoms of heat problems:
Heat exhaustion – headache lethargy, nausea, perhaps confusion.  Sufferer will be warm and sweating.
Heat stroke (life-threatening) – delirium. There is usually no sweating, and the sufferer may be asking for blankets or shivering. Excessive heat makes the brain’s thermostat go haywire. 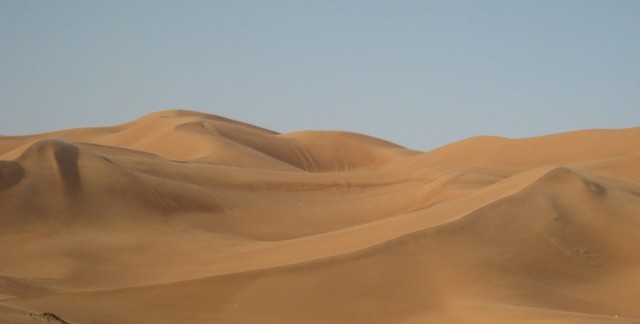 Treatment:
Cool down as quickly as possible. Strip and spray or sponge, preferably with a fan.

Finally, if you are exercising in hot temperatures, particularly for prolonged periods, drink when you are thirsty and don’t over-hydrate. There is no evidence that dehydration impairs exercise performance.  Often the best marathon runners are the ones most dehydrated at the end.  But over-hydrating can kill!  Excess fluid intake can cause hyponatremia, which is low sodium in the blood, which causes brain swelling and death.  Not nice.

Everest
And, lastly, a little bit of insight into deaths on Mount Everest, also provided by Chris Imray, who was on the Cauldwell Xtreme Everest expedition.

Here are some graphs of summit time on the mountain for survivors and non-survivors.  The peak of bell curve for successful summiteers is around 9am, peak of curve for deceased is around 2pm.  There is a significan difference between summit times for surivors and non-survivors, and most deaths above 8000m occur during descent.  Climbers must retain sufficient energy and oxygen to get down.  So don’t hang around! 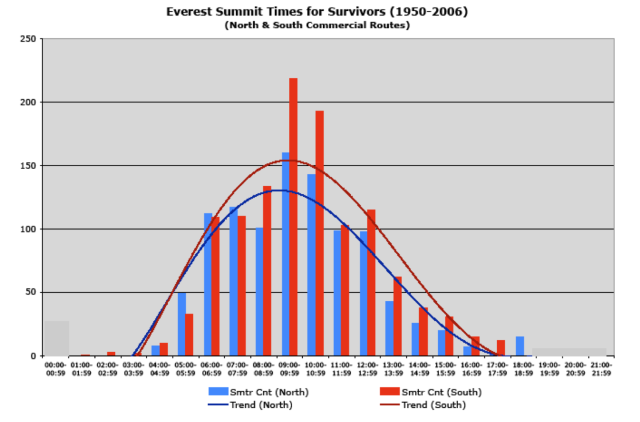 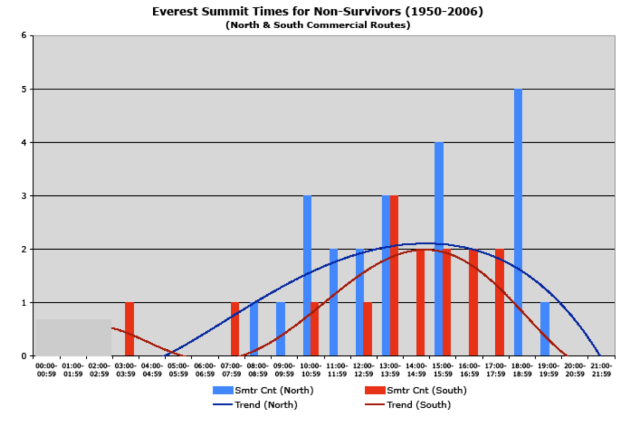 These are just a few pieces of information from the conference that I found interesting and practical, but there was so much more. If you’re a medic (or even an interested physicist/other like I am) look out for the Extreme Medicine Expo next year.