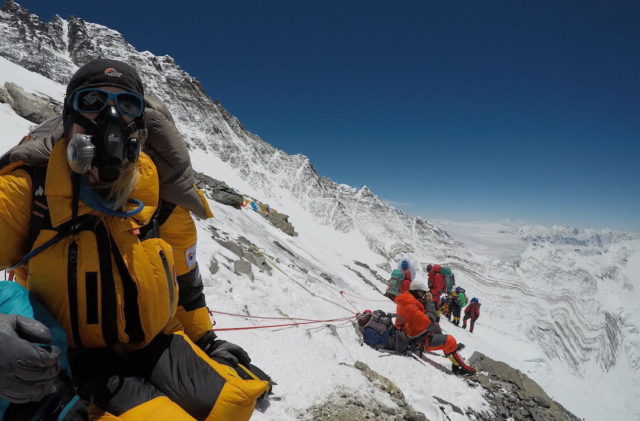 Supplementary oxygen is used by the majority of climbers on Mount Everest – it doubles the chances of getting to the summit and reduces the risk of complications like frostbite. But dependence on oxygen up high means that climbers can be more vulnerable if the oxygen suddenly runs out.

This Everest season heard several reports of oxygen problems, with Presenter Ben Fogle being amongst those with issues. Recalling losing his oxygen supply, Fogle said: “I did start to panic and hyperventilate. It felt like losing my scuba tanks under water and I only had one gulp of breath. My head just dropped into my hands.”

Since the vast majority of climbers rely on oxygen to get to the summit and back safely, this is a serious problem. So what was going on?

Firstly, oxygen tanks did not explode, as some reports stated.  The cylinders that contain the pressurised oxygen gas are very sturdy.

What “exploded” was a valve in the regulator. This is the piece that connects the high-pressure oxygen cylinder to the climber’s mask, where low pressure oxygen is delivered. It incorporates a special “pressure relief” valve that releases any excess gas in the system.

In a few cases this valve froze up and the pressure built until the valve blew out – which then released all the rest of the oxygen from the tank. This was the problem Ben Fogle suffered. 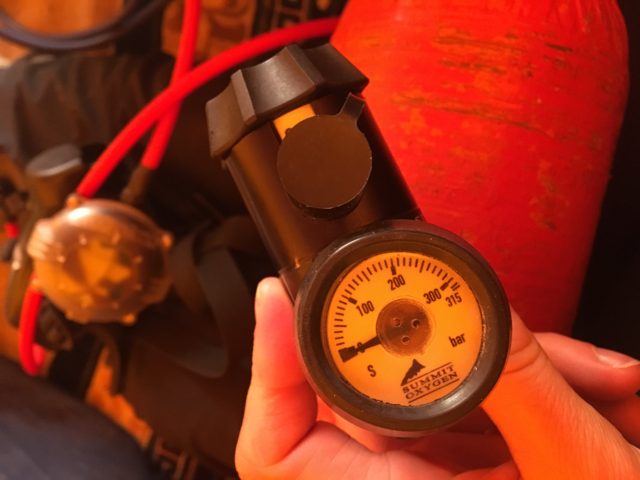 An oxygen regulator and pressure gauge that screws onto the oxygen cylinder.

How dangerous is it?

Losing all your oxygen near the summit is dangerous because it means you have to make a steep descent of several hours without supplementary oxygen, and with the potential of becoming weaker due to exhaustion and altitude sickness. But it does not mean instant death like losing scuba tanks under water.

What probably added to the problem was the sense of panic. Ben Fogle mentions hyperventilating, which was probably the reason he felt like he had only “one gulp of breath”, rather than the immediate lack of oxygen. I had my oxygen mask off for around 20 minutes at the summit – just a few days later – as we took photographs and collected snow samples for research, and I wasn’t gulping for air.

Video: How do oxygen systems work and how they have changed since the 1950s? Dr Melanie Windridge interviews Neil Greenwood of Summit Oxygen and shares her experience of oxygen on the mountain as part of her Science of the Summit video series on the Institute of Physics’ YouTube channel.

After years of problem free oxygen, why did this happen now?

What is interesting is that all the reports of this “pressure relief valve” problem are from the same night, that of 15-16th May. Director of Summit Oxygen, Neil Greenwood says that this is the 6th year that this design has been used and that there has only been one night of reported problems.

It turns out that that night the humidity was unusually high, so there was a greater amount of moisture in the air to freeze up the valve.  Summit Oxygen is now doing tests on the system to try to reproduce the problem so that they can fix it.

Tents at the bleak and windswept South Col with a big pile of oxygen cylinders in the centre.

Was this the only problem?

As for the other problems, it seems that some users who were not familiar with the oxygen equipment may have been spooked by hearing a rush of gas when connecting the regulators.  This can happen if an o-ring seal has been slightly damaged during previous use. Screwing the regulator in a little further will close the seal, stop the whooshing sound and the oxygen system will work correctly. But some users, perhaps worried by other reports of oxygen failure, thought that their oxygen had failed too.  They didn’t have enough understanding of the system to do anything about it.

It’s something we can all relate to with technology, whether that’s a printer or a smartphone or a car or a potentially life-saving piece of oxygen equipment. Most of us don’t understand enough about what we are using to know what to do about it in case of a problem. This may be fine when we have others around us who do, but when you are isolated near the top of a mountain, a little extra understanding could go a long way.

Neil Greenwood suggests Sherpas and guides need specific training on the workings of the oxygen systems.  “Unfortunately, many operators have not been sufficiently trained in oxygen systems. They know how to use them, but not how they work, so they don’t know what to do when something unusual happens. That’s one of the big problems that needs to be addressed,” he said, “we will attempt to do that.”

However, it doesn’t significantly reduce the death rate, perhaps because only experienced climbers tend to attempt Everest without oxygen and they are more likely to heed warning signs and turn back.  So, for commercial clients, supplementary oxygen is definitely worth using but – as with most things on the mountain – a little extra knowledge and experience could go a long way.

Melanie summited Mount Everest on 21st May 2018. Find out more about Melanie’s Everest climb and the associated outreach project.