For our attempt on Mapiraju we returned to the Cayesh valley but, this time, we walked right to the end to pitch our camp. We looked back down the valley towards the hulking peak of Ranrapalca and across the river to a chunky ice-fall where the glacier calved off the cliff edge. It was hot in the afternoon sun as we rested in our new camp. 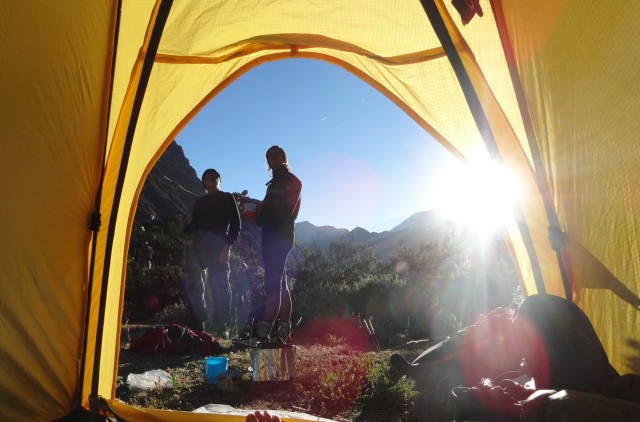 Afternoon view from my tent, looking back down the valley towards Ranrapalca.

On the morning of 18th June we left camp around 6am, just as it was getting light. We pushed up through scrubby bushes until we reached the path that took us up to the col. As usual, it was steep. We wound our way up through grass and bushes until we reached rock and dust. We continued on, bumping over rocks and stones, some of them sparkling with tiny crystals, most a deep orange or rusty brown. It took over two hours of steady ascent to the col. My throat was dry and breathing made it feel like sandpaper. I kept my buff over my mouth, trying to keep in important droplets of water vapour.

Eventually we reached ice at the col and we stopped to rope up and put on crampons. The glacier directly ahead and across from us looked steep and impassable from this angle, so we crossed the dry glacier at our feet and climbed over a rocky section to ascend the steeper glacier from the far right side. On the dry glacier, ice stretched up as fractal fingers and the surface resembled sponge or coral. At this early hour, rivulets and pools were frozen over, but Rafal fell through thin surface ice over one of these pools, plunging his foot into the icy water and soaking his boot and sock.

Beyond the rocks, we were again on glacier, a thin layer of snow crisp and breakable over the hard ice below. We headed to our left up the steep slope, a magnificent, shining blue lake far below to our right. Up we went, around a crevasse, and then on up again, front-pointing up the icy slope and placing ice screws for protection*. Then the slope levelled off and we crossed a snowy plateau for perhaps 50-100m, walking towards a tongue of rock separating us from snowy slopes to the summit. 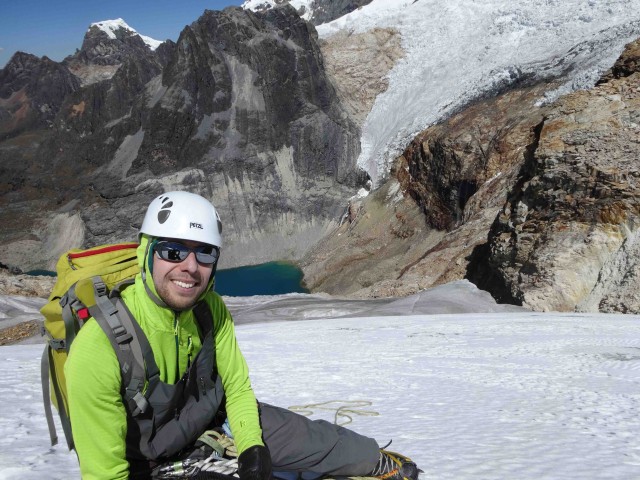 Looking down at Rafal with the blue lake in the background.

We crossed the rock and climbed the snow. It was steep and hard work, with the odd crevasse to navigate for good measure. The five of us reached the summit just before half past eleven – five and a half hours to ascend. 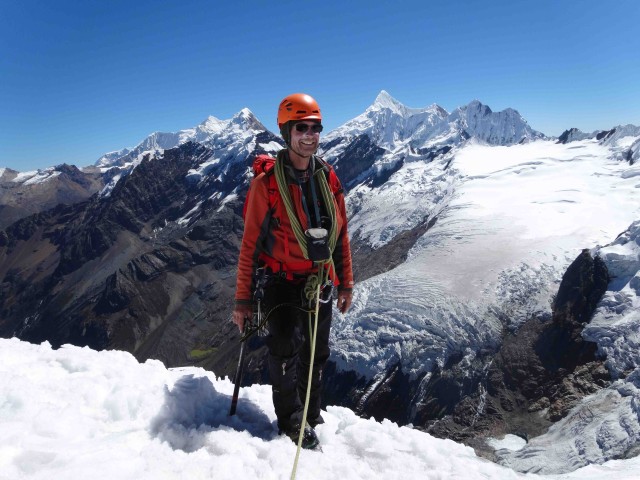 Dave on the summit of Mapiraju. Montains in the background are Chinchey (right) and Pucaranra (left). The glacier and ice fall we could see from our camp are also in view.

We retraced our steps for the descent, placing ice-screw protection and down-climbing the steepest, icy slopes but walking the rest. Back at the rocky col again, we removed harnesses and crampons and took the winding route back down to our little camp. We were back around 3:30pm. 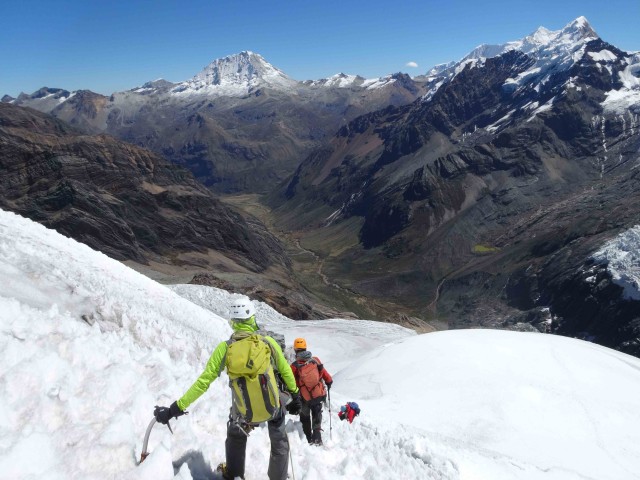 Descending the summit slopes from Mapiraju.

*Front-pointing is where (on steep ground) you face inwards and kick the front points of your crampons into the ice, swinging your ice axe hard so the pick gets a good hold in the ice above, progressing upwards almost as if climbing a ladder. Ice screws are large, hollow screws, about six to eight inches long, with a carabiner attached. They are drilled into the ice and the rope is run through the carabiner so that they may arrest a fall in case of a slip.