Jatunmontepuncu (also known as Huapi or referred to as Peak J in our camp), was climbable from base camp in a single push, but we decided to split it over two days since we had time. On 14th June we walked up through the steep zig-zags to the meadow area that we had visited several times during acclimatisation hikes. We camped beside a small lake at around 4900m altitude. We were close to the moraine that we had to ascend to reach the glacier in the morning.

Up here, rather than camping, I bivouacked for the first time. It was fine, though a little cold and awkward in the morning since I was wearing all my warm clothes. I just stayed in the bag while Dave boiled us water. After I’d eaten breakfast I got out, put boots on and made ready to leave. The best part of bivouacking was waking up in the night to see the stars. In the early hours of the morning the bright moon had set and the stars were much clearer. At about 4am I opened my eyes to see the Milky Way stretched out above and across me. As I looked, thinking how lucky I was to just lie here and see this, a big shooting star streaked right across the Milky Way. I thought I would watch for more, but very quickly I was asleep again. 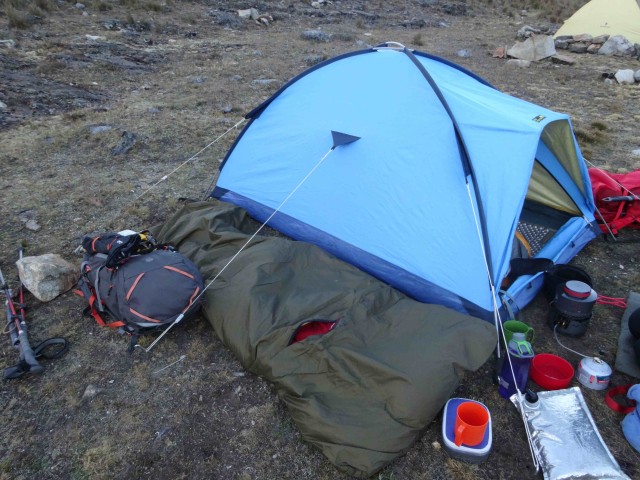 My first bivi. I slept in the bag beside the tent.

We left soon after first light, at 6:30am, and began the trudge up the moraine. Despite it being light, I still had that heavy, morning feeling. My body wasn’t yet loosened up. My dry mountain cough had also worsened in the night and my breathing felt more laboured than usual, but I plodded on. Towards the end of the moraine slope we traversed to the right over larger boulders, heading for the end of the glacier. We reached the ice and stopped to rope up and put on crampons. The sun was fully up now, but the wind was cold.

On the ice we immediately tackled a tricky bit – a narrow path between a crevasse on one side and a drop-off down the mountain on the other. The crevasse didn’t look too deep but the drop-off to the right was considerable. I had a wobbly moment and despite the path being almost a foot wide, easily enough to walk along comfortably, instinct made me drop to my knees to hold on! But that was worse because the crampons, which had the grip, were on my feet. So with Dave’s encouragement (“don’t look where you don’t want to go,”) I got to my feet again and walked across.

Another awkward move across a deep crevasse and over some more hard ice and we were on snow, where the going was easier. Dave and I on our rope followed behind Derek and Rafal and I was grateful that the pace was fairly slow since the heaviness had never left my legs. We kept it steady.

We climbed up a little way through rock on the ridge, circumnavigating some awkward crevasses, before getting onto snow again. A little higher and we came up to a large, overhanging serac. Initially we walked around to the right and climbed a small incline of ice, but it didn’t seem a viable route so we retraced our steps. Around to the left of the serac there was a dicey step around the ice ridge, which brought us out onto a wider slope. After a few steps on ice we were on easy snow again. 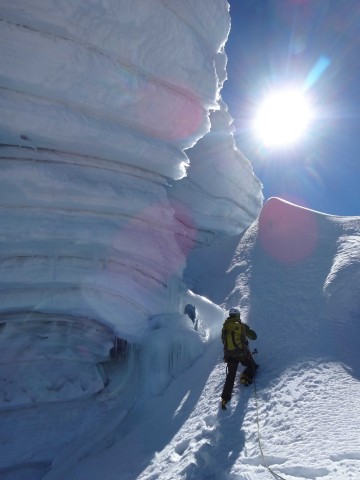 The wrong way around a serac.

Soon we reached a final scramble of rock and we removed crampons and ropes to make the last ascent to the summit. We were there at 10:30am, after four plodding hours. We descended the way we had come, and I walked over the narrow ice path that had phased me earlier without even a hesitation. By midday we were back at the moraine removing crampons, and by just after one o’clock we were back in out little high camp drinking tea and packing up for the final descent into Base Camp. 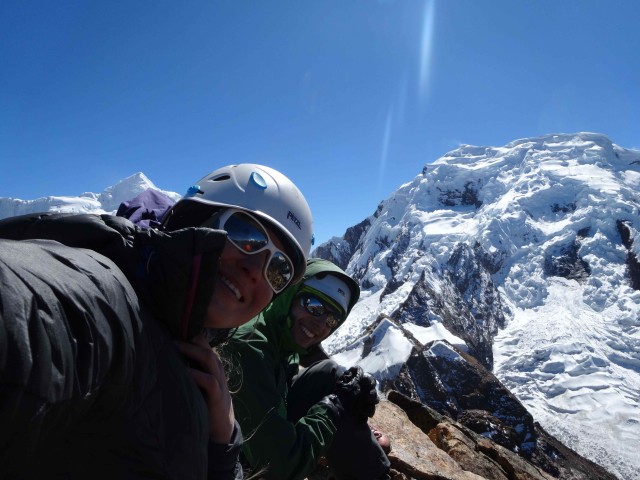 Me and Rafal on the summit of Jatunmontepuncu, Peru. 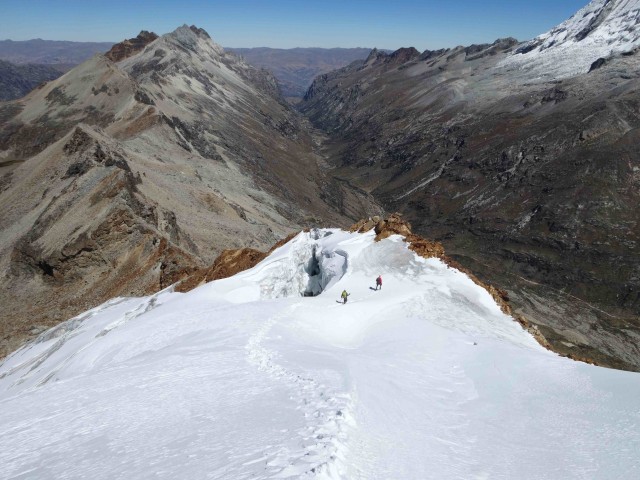