On 11th June we moved from Base Camp to a smaller, temporary camp in the Cayesh Valley, a couple of hours walk from base down the adjacent fork of our valley. We all had heavy bags – stuffed to bursting and with crampons, axes and helmets strapped to the outside. We made camp quite near the valley fork, after a tricky crossing of the peculiar orange river in full flow. Later, a few of us walked to the far end of the valley to explore route possibilities for the following day. In the end, we decided the most promising looking route was straight up the slope behind our campsite, passing through some high scree to see if we could gain the ridge that way.

Our little team – Dave, Rafal and I – started out at five o’clock in the morning. It was dark. The first hour was spent climbing the scrubby slope above camp. It was very steep with spiky pampas-like grass that gave out into spiky bushes that we pushed through. There wasn’t a path as such. Occasional cow tracks began and then petered into nothing. We just pushed on up. It was hard work; but that was just the start.

With daylight increasing quickly we got onto the scree – acres and acres of it. It was steep and shifting. It started snowing, dusting the rocks whiter and whiter as we climbed higher. We picked our way up over the rocks for hundreds of metres, diverting around rock-band cliffs and scrambling up a particularly steep, disconcerting bit (fine scree over rock and sand) to finally reach the col. It had taken over four hours of plodding and sliding to get through the scree. But it had now stopped snowing and the sun was out. 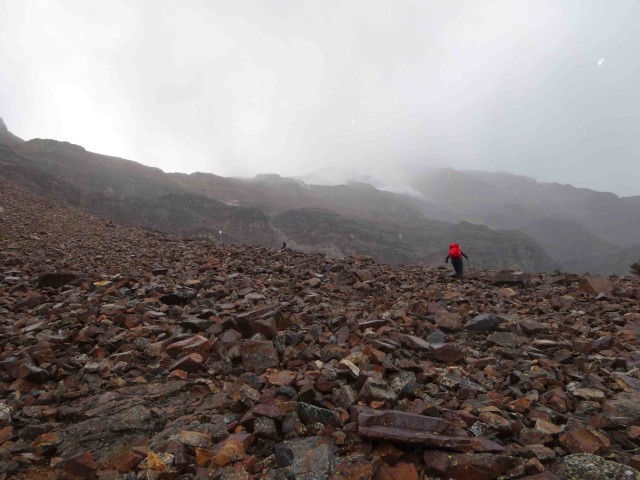 Walking up scree as the cloud and snow came in.

We walked and scrambled along the ridge for a while until we reached the snow. The ridge was quite exposed initially but widened out a bit. The valley sides were so, so steep. I looked straight down to see our tiny tents glinting below – almost a thousand metres below. “It’s a long way to fall,” I thought.

At the edge of the snow we put on harnesses and crampons and roped up. We began the walk up the glacier. It was icy rather than snowy. After a while it got steeper and icier and more exposed, so Rafal, who was leading, started placing ice screws for protection. At the top of the steep section was a metre-wide ledge gently inclining to the left. It was under a giant serac dripping with huge icicles. It was rather beautiful but, nonetheless, we tried to minimise our time there underneath it. 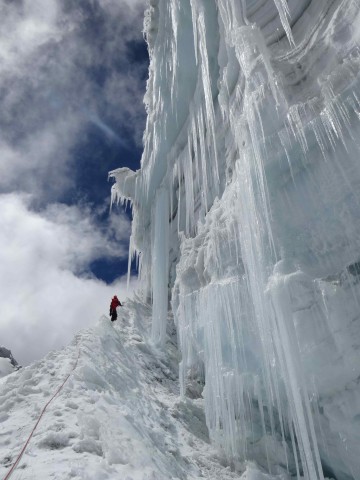 Huge, icy serac at the summit of Chopiraju Oueste.

We followed the incline up to our summit, actually a part of the ridge adjacent to – and about the same height as – the giant serac, which we didn’t want to stand on. We looked along the ridge to the Central summit (5518m) – an undulating, crevasse-dodging route – and decided that we were happy with simply attaining the West summit (4475m) only. It was already 12:20pm. 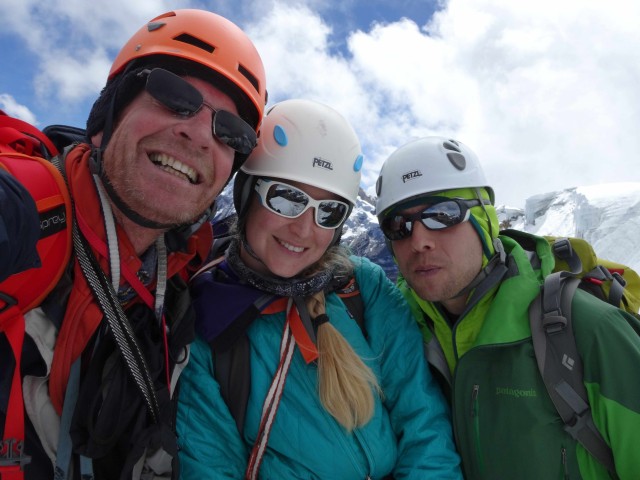 The team at the summit of Chopiraju Oueste.

So after a quick snack we headed down. It was tiring down-climbing the steep ice, kicking my cramponned toes hard into the brittle surface and swinging my ice axe strongly enough to get a good hold. I even slipped slightly towards the end of the down-climb, sliding a couple of metres down onto rocks. It was 3pm before we were back at the col and ready to tackle the scree.

Of course, the scree was slide-y and horrible. Towards the top, though steeper, the scree was lighter and easier. Dust, sand and small stones allowed a quick, sliding progression, but it soon turned to larger, slipping boulders that required concentration to navigate. It was a relief to step off the scree onto grass after a couple of hours. Then it was only a few more bushes to push through (easier in daylight) till we were back at camp. It was 5:30pm – twelve and a half hours since setting out.

This was our first summit in the Cordillera Blanca after acclimatisation walks.