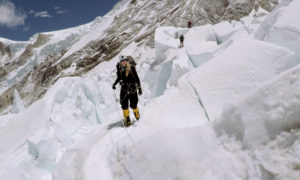 Melanie in the Khumbu Icefall on Mount Everest

I’ve recently entered a short film about my Everest trip into the BMC Women In Adventure film competition 2019, so I thought it would be a good time to share some information on women on Everest.

The most striking thing is that there aren’t that many women on Everest.

Everest was first summited in 1953 by Edmund Hillary and Tenzing Norgay on a British expedition comprised entirely of men, unsurprisingly for that time.  Incidentally, the journalist from The Times who accompanied the expedition – and who went as far as Advanced Base Camp well into the Western Cwm – was James Morris, who in 1972 had sex reassignment surgery and became Jan Morris.  So, now, the only living 1953 expedition member is a woman.  But on Everest at the time they were all men. 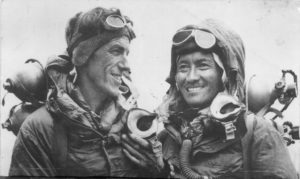 The first woman to climb Everest was Japanese Junko Tabei in 1975 on a women’s expedition as part of the Ladies Climbing Club: Japan, which Junko founded in 1969 (partly because of how she was treated by male mountaineers at the time, many of whom were unwilling to climb with her). 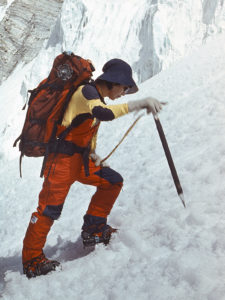 Junko Tabei in 1985 at Ismoil Somoni Peak in Tajikistan

When I was preparing to climb Everest I looked into the statistics to inform my preparation, and I came across a paper in Biology Letters (2007) called “Effects of age and gender on success and death of mountaineers on Mount Everest” by Huey, Salisbury, Wang and Mao.

This is what they said about gender:

“We found that women and men have similar odds of summiting, death overall and death during descent.”

Age was a different matter.  Summiting Everest becomes steadily more difficult after the age of 40, and death rates increase quite significantly over the age of 60.

“On Everest, youth and vigour trump age and experience.”

If we look at the statistics from Everest, up to and including summits in 2018, we see that the number of women on Everest (and the proportion) is increasing each decade.  Yet over all the successful Everest climbs over 65 years, women have made not even 7% of summits.

If we look at individual climbers, irrespective of the number of times they have summited, to date just over 10% of the individuals who have summited Everest have been female.  Women are still very much in the minority.

But perhaps it’s encouraging for women to know that – as the stats show – women are no different to men when it comes to climbing Everest.  Perhaps this is because Everest requires more mental strength than brute, physical strength.

I hope you enjoy this short film of my own Everest experience, as one of the (growing!) 10%.

Video: Mount Everest – an icon of human exploration and adventure – is mostly the arena of men. Just over 10% of all Everest summiteers are women, fewer if you include the Sherpas. This is the story of one woman’s adventure to the top of the world, and why it meant so much to her.

Entered for the BMC TV Women In Adventure film competition 2019. Find out more about the competition: https://www.thebmc.co.uk/waf