Clouds at Everest Base Camp clear to show the peak of Nuptse.

Getting caught in a storm on Everest can be dangerous for climbers, especially towards the summit. The final push from base camp takes at least 4 days, and it’s important for safety that there is a clear window of good weather for the entire period.

Improvements in weather forecasting have made a huge difference to safety on Everest, but what has caused this improvement, and what are the specific challenges on Everest?

How do we forecast weather?

Weather forecasts are made using data collected on the current state of the atmosphere – such as temperature, humidity and wind – and feeding that into models which can predict what changes might occur in the near future.

These models are built using past data on atmospheric changes which has been rigorously analysed to build an understanding of atmospheric processes. This – alongside an understanding of the fundamental physics which describes how liquids and gases move – gives us a good idea of how weather typically progresses under a given set of conditions, and how combinations of different weather conditions tend to interact.

This is hugely complicated as there are many variables, the atmosphere is chaotic, and because we are trying to model the entire world in real time. To simplify things a little, the models break down the atmosphere into separate layers all around the globe and they make some approximations, such as how they represent the complex structure of clouds.

Why is weather forecasting more difficult on Everest?

Modelling mountain weather is particularly challenging because conditions change so quickly and there are far more local effects. Winds behave differently on steep slopes, and temperature – which can be fairly stable across a large flat area – drops quickly with increased altitude.

Furthermore, as you go higher winds are stronger and, above 2,000 meters, clouds move in and out, which affects visibility and can lead to very rapid coverings of snow. Mountain forecasts need their own set of models based on how winds and clouds move in these extreme environments.

Video: Melanie visits the Met Office and talks to Alex Deakin to find out how weather forecasting helps climbers on Everest, and shares her experience of the weather when climbing Mount Everest

How has weather forecasting changed in the last 30 years?

Weather forecasts have become much more accurate in the past years, largely thanks to advances in computer processing power. This allows many more calculations to be performed, so the globe can be broken down into smaller grid-squares and layers to be analysed in greater detail.

The result is better representation of weather patterns, which means we can predict further into the future with the same accuracy. 4-day forecasts nowadays are as accurate as the 1-day forecasts of 30 years ago.

Clouds build up in the mountains beyond Dingboche.

How has mountain weather forecasting changed?

30 years ago mountain weather had not been well studied, data was limited and models were not very accurate. Mountains are still more complicated and harder to predict than most weather systems, but we now have better data to feed into models, and we can do more calculations. Although there are still some uncertainties, forecasts a few days ahead are generally fairly accurate.

There are several weather forecasting organisations, with the UK’s Met Office being one of the best known – and they all use slightly different models.

Expedition leaders on the mountain generally have a favourite forecast provider, but they may talk to each other and compare forecasts when making decisions on when to strike out for the summit. Primarily they look for light winds and lower precipitation, which means good visibility, no sudden snowfall and little chance of a storm swooping in unexpectedly.

“Mountain weather is notoriously difficult to get right” said Victor Saunders, a mountain guide on Melanie’s team, “the general rule is that if they all agree then you probably have a correct forecast.” 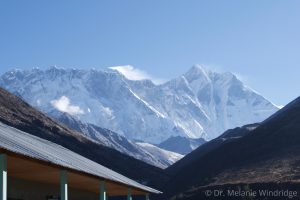 The peak of Everest from Pangboche, seen poking up behind the Nuptse Wall. Often, like in this picture, Everest has a large plume of snow coming from the top, indicating high winds on the summit.

In early May 2018 the jet stream – a core of strong winds around 5 to 7 miles above the Earth’s surface – moved over Everest, making it very windy. Teams, including Melanie’s, were stuck at Base Camp, waiting to move.

Then, a large high-pressure system came in which lasted for an unprecedented 11 days, and Melanie’s team set off. It was a beautiful time to climb, with milder temperatures and calm winds, and many climbers, one of them Melanie, saw beautiful summit days.

With thanks to Alex Deakin, Senior Presenter, The Met Office