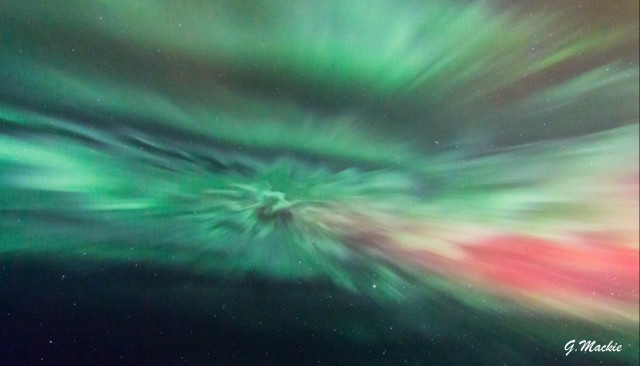 It was early evening in the mid to late summer in Louisbourg, Cape Breton, Nova Scotia and I had left home to walk the mile or so to my friends house. The sky was clear and the temperature moderate and I was looking forward to a few hours of goofing off before the town curfew sang it’s siren song at nine o’clock that evening. In those days we rarely wore a watch so the curfew gave us a heads up on how late it was getting so we could plan to be home before midnight.

After exiting the narrow path through the woods and starting to make my way down the back road where the old train tracks used to run, I happened to look up and noticed the northern lights shimmering low in the northern sky. They were green in colour but as I walked and watched the display moved upwards and spread out to both the east and west. Increasingly, the height of the aurora grew to cover all the sky from the horizon to almost directly overhead and the colour began to change from green to red. Then, both eastern and western edges crept towards the southern hemisphere gradually forming a cone around me. The activity and brightness of the aurora also increased as the shimmering, now fully red sheets, completed their travels to form a perfect red cone culminating in a round hole above my head.

I felt as if I were at the bottom of a gigantic active volcano and had to get off the road and lay down on a residence’s lawn so I could witness this amazing sight in comfort without craning my neck. I honestly have no idea how long I lay there but I eventually got up and tried to run the rest of the way to my friends house so that he and his parents might have a chance to also see this incredible display.

By the time I arrived, excited and out of breath, the brilliance of the aurora had diminished somewhat but still maintained it’s conical shape long enough for my friend to get outside. Not long after this, the event gradually lost it’s intensity and shape, retreating once again to the northern area of the sky. As it did so it lost much of it’s red intensity, shrinking down closer to the horizon to eventually become green once more.

This event happened many years ago, probably sometime around the mid to late 1960’s and while I have seen quite a number of displays in the years since, none have compared to this one in both intensity and colour. I have only seen hints of red and partial formations of a cone in all the years since. Looking back, I realize how truly fortunate I was to see what I consider to be such a rare event in both colour and shape.

After listening to you speak about the aurora borealis on a recent episode of CBC’s Quirks and Quarks, I was immediately reminded of this incident. I enjoyed your interview and thank you for allowing me to re-visit a treasured memory.