I was in the USA, working for a small convenience store group. We’d been hired for the ski season at Mount Snow, Vermont. The personnel people had travelled to Dublin to hire us in late 1988, with a view to an early January 1989 start. I had been to the USA 3 times before this.

I had never, however, been to Vermont.

On 6 Jan. 1989 we arrived into JFK Airport, into the thickest snowstorm you can imagine. Our Are Lingus B747 was in a 45 minute holding pattern; it was a great relief just to land in one piece. It was snowing so hard as we left to drive up to Vermont, I thought they would have to close the airport. They didn’t, and there was no accident. A miracle.

Just as we were settling in – into our new digs at West Dover, Vermont – two days after arrival, news came in on CNN about the Kegworth, East Midlands, plane incident in the UK. Fickle fate.

Approximately five or six weeks, as I recall, into my working stay in Vermont, I saw the aurora. It was astonishing.

I had finished up working at the store at about 10pm. Very dark, very cold. It was coming into the 3rd week in February, I believe. I drove the 3kms home to the Doverhof Inn with a girl I had met a few days previously. She was a vacationing skier from New York State.

Driving northeast, away from the West Dover store and towards the Doverhof Inn, we both simultaneously noticed a reddish hue in the sky, through the tall trees.

I had heard of the Northern Lights before, everyone had. I immediately thought, ‘Good Lord, is that the northern lights?’ and the song ‘Northern Lights’ by Renaissance came immediately to mind. I couldn’t get Annie Haslam’s lovely vocal out of my head…. I just had to get to the higher ground of the driveway of the Inn, as soon as possible, to view it better.

Two minutes later we are in the driveway, and we both get out of the small truck. The sight was even better than I could have imagined.

Great hanging curtains of red, green and blue pulsating light… with very distinct lower ‘hems’ to the massive, serpentine ‘curtains’. The colours criss-crossed as green invaded blue, and blue invaded red. In reaching upwards, from lower distinct ‘hems’, the colours evanesced, somewhat, but were still ultra-vivid. I had my glasses on, thankfully, because I have mild myopia.

I think it was something like 10.15pm, or maybe later. It was super to share it with someone… and she had never seen anything like this before either.

Culturally, I had always had the notion that I would never see the northern lights, because, well, they are supposedly rare, and you have to go to northern Norway etc.

So, it was a shock and a thrill to have this 15 minutes or so with them. It was quite a romantic moment for the pair of us, I have to say.

Don’t ask me to guess distances or lengths of the huge ribbon-curtains… I wouldn’t have a clue, but your article in the Sunday Times did speak in terms of tens of kilometres, and hundreds of kilometres.

West Dover, Vermont, in late February is a rural, lonely kind of a place, so there was no one else immediately around to confer with… and I didn’t want to wreck the moment with herself!

After some 15 minutes, as I recall, the colours seemed to pull up into themselves, and the pulsations grew fainter, and we were quite sated, so… it ended, and we went up into the house.

This story is by KJ, Dublin, Ireland. 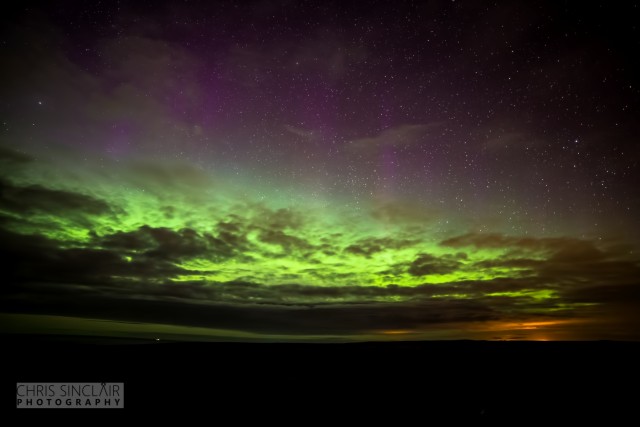