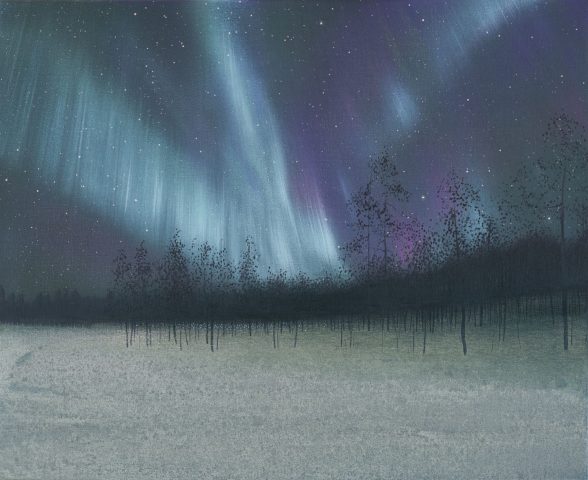 Nicholas Jones and I met in 2017 when he invited me to the exhibition of his new Aurora paintings at the Crane Kalman Gallery in London. He had seen my book Aurora: In Search of the Northern Lights and realised that we had a shared passion—the Arctic, the light and the aurora.

In my book, I talked about aurora in art. Before photography, it was only through art that the phenomenon could be captured at all. Historical works in the sixteenth century show the aurora in the superstitious light of the time, depicting it as flames or knives in the sky. Later, scientists often penned their own pictures for their records and works, such as Jean-Jacques d’Ortous de Mairan’s early textbook on the aurora in the 1700s; explorer Fridtjof Nansen produced a woodcut from a crayon sketch he made in November 1893 when he was on the Fram; and a painting of a bright red aurora overhead was found amongst scientist Carl Størmer’s records in the twentieth century, even though he spent his career photographing the lights. Now we have cameras to capture the aurora, but that doesn’t make art obsolete. It brings something different. 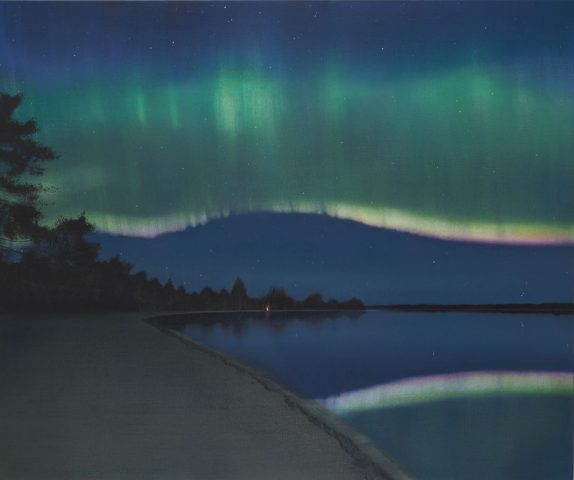 Nick has made some beautiful videos about his evolution as a painter and how he came to be painting the softly majestic landscapes of the Arctic and the changing light. He encourages us all to see the world in a different way.

Anyone who has read my book or seen the aurora for themselves will know about the fascination the aurora engenders in so many of us. As I was, Nick was drawn to the Arctic in search of the northern lights, and then was drawn back again and again by this mysterious, mesmerising phenomenon that always leaves you wanting more. His gift is being able to capture the aurora on canvas and to convey the subtlety and purity of the aurora in a way that the camera often cannot. Artists can give us a view of the aurora more compatible with our own recollections, with what the human eye actually sees.  And through that, the paintings evoke a feeling closer to that which humans actually feel when witnessing the aurora in real life.

An Introduction to the Paintings of Nicholas Jones

Modern photography gives us spectacular images of the aurora and an enhanced view—not a fake view.  The camera collects the light that is actually there with an ability greater than the human eye, enabling us to see more.  But art can better give us the feeling of being there.

I encourage you to visit Nicholas Jones’ website to see his paintings, especially Aurora;

I would also encourage you to read his piece about the aurora. It’s lovely to know that wherever we are in the world, we can still feel some of the wonder of standing in the snow, staring up in awe at the wide sky or the changing light.