Two weeks ago I left London and flew to Canada for the first part of my Northern Lights research trip.  It’s summer, so I wasn’t travelling to see the northern lights, just to visit physicists and other experts and to take in some of the northern atmosphere.

On the way we flew over Iceland, Greenland, and down over Northern Canada, so I saw some beautiful landscapes of ice, sea, mountains and lakes – as well as some beautiful cloud formations – on the way. 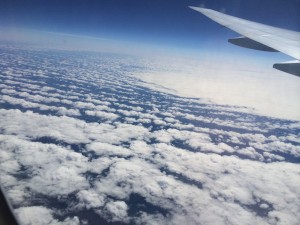 Interesting cloud formations on the way to Canada.

I spent four days at the University of Calgary with Eric Donovan and his group talking about the physics of the northern lights.  It’s fascinating stuff and I could have spent longer.

From there I drove three hours north to Edmonton (where there is a huge mall that includes – in addition to shops – an ice rink, a beach lagoon swimming pool with waves, a mini theme park with rollercoaster, mini golf and a water park with sea lion show) and I met another physicist who took me two hours further north to Athabasca, where we visited an overnighted at a small observatory. 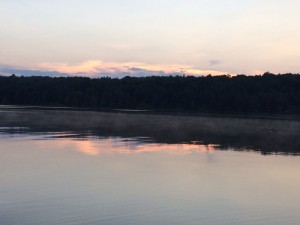 Sunset at the lake near the Athabasca observatory. 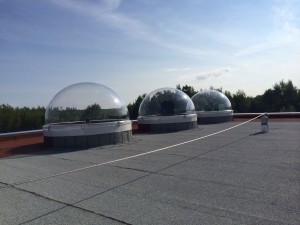 Three of the six domes on the roof of the Athabasca observatory.

The observatory is just outside Athabasca by a beautiful lake.  It has six domes on the roof inside which sit various types of imaging devices, from ordinary digital SLR cameras to single wavelength photometers.  Canada has the majority of the land mass that sits under the auroral oval so it is perfect for imaging the aurora.  Canada has a network of cameras in many locations across the country – All Sky cameras with fisheye lenses looking directly upwards and taking pictures of the entire sky from each location.  Looking at the images from all of these locations together gives an image of the aurora all across Canada, allowing us to see arcs and features that can stretch across the whole continent!

From Athabasca and Edmonton I went up to Yellowknife, a town situated at 62 degrees north, just south of the Arctic Circle.  I spent my days exploring the town, the Prince of Wales Northern Heritage Centre and the Legislative Assembly, learning about the region, the people and the history.  It’s a land of contrasts – summer or winter, days or nights, pristine wilderness or contaminated mining sites, tradition or progress.  In the evenings I would see James Pugsley from Astronomy North and we would talk about the aurora and science and outreach.  We drove out to an old mine site – the Con mine that started the Yellowknife boom – and the AuroraMAX observatory which houses another All Sky camera.  It is a bit like a garden shed with a chimney stack and a dome on top.  In the summer it is hot and stuffy in the shed and we were eaten by mosquitoes on the way from the car to the door.  Inside are the cameras (currently turned off because it’s summer) and a computer for running them.  Heating and cooling is required for the extremes of temperature encountered between summer and winter. 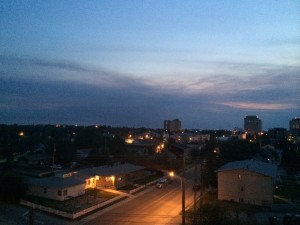 Yellowknife was interesting also because the days were so long.  I felt so productive and awake and was going to bed really late.  At 7pm it felt more like 4pm and it didn’t really get dark till about midnight.  Then the sun must have risen again between 2 and 3am, though I never was awake to see it. 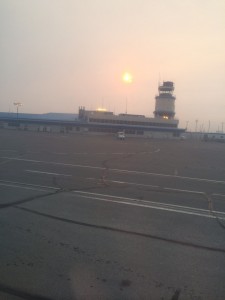 Hazy Sun through the smokey air at the airport in Yellowknife.

There were forest fires going on all around Yellowknife when I was there.  You could smell the smoke on the air, like sitting around a campfire.  The day I left it was particularly bad.  The air was hazy and the views obscured.  We took off and had barely left the ground before the land was invisible through the haze.  So ended my trip to Canada – a fascinating and inspiring journey that has left me wanting to learn more and wanting to come back (in the winter of course!).  I can only thank all those who gladly and enthusiastically gave me their time to talk to me and show me around, and the numerous others I met along the way who touched me with their friendliness and their kindness.

My time in the north November 12th, 2018Melanie Windridge