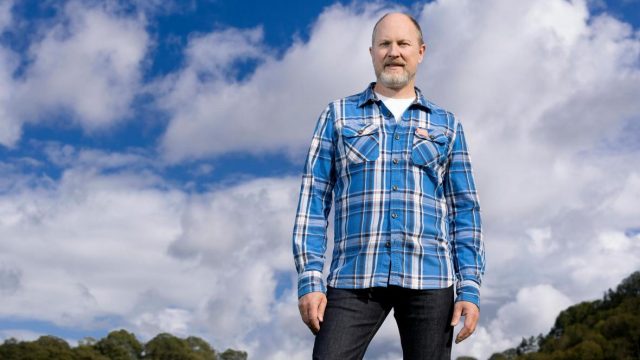 Gavin Pretor-Pinney is the founder of the Cloud Appreciation Society (CAS), which aims to foster understanding and appreciation of clouds, and has over 50,000 members worldwide from 120 different countries. He has also written several books, among them The Cloudspotter’s Guide, The Cloud Collector’s Handbook and, most recently, A Cloud A Day.

Melanie has joined several of the society’s trips to speak about the aurora and eclipses, ironically both phenomena where we don’t want the clouds to get in the way! But, just like aurora spotters, cloudspotters have a thorough appreciation for the sky and it’s with that in mind that we spoke to Gavin.

1. How does a typical day as a cloudspotter start for you?

Like most cloud appreciating people, I start by taking a look at the sky. Everyday feels like a new page. On the one hand the sky is never changing. On the other hand, no day is ever the same. Looking at the sky is a moment for yourself before your day begins. You get to see what the day is going to hold. 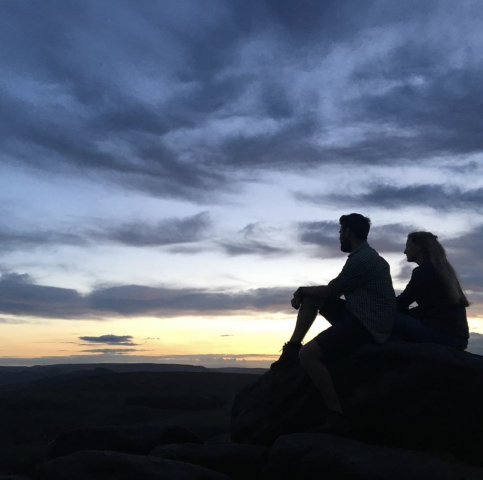 Every morning, we send the “cloud-a-day” email to our subscribers. It’s meant to be an invitation to our members to pause before their day begins and engage with this omnipresent aspect of nature. The content is generated by our members and curated by the CAS editorial team. The email will either include a member’s photograph or a detail from a painting where the artist has depicted the sky interestingly, as well as a short explanation of what we see happening in the image or a quote to accompany it.

One of the things we’re working on at the moment is to introduce features to the website that allow our members to communicate with each other. This is a new venture for the CAS. In the past, we always acted as a sort of middleman. Now we facilitate local groups to speak with each other in their local cloudspotter societies.

2. What fascinates you about clouds?

Clouds are a most evocative, dynamic and poetic aspect of nature. They have abstract forms to them and they’re constantly in flux and changing, but at the same time there are recognisable patterns. They’re always different and yet also show familiar faces or characters so to speak. Clouds are like expressions on the face of the atmosphere. They reveal the atmosphere’s shifting moods and perform lots of important roles for humans, practically and emotionally. 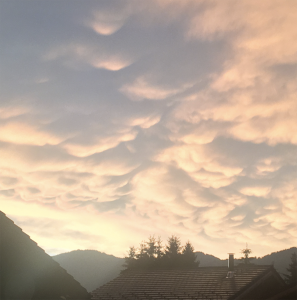 From the practical and physical point of view, reading the sky helps us to anticipate what will happen in the short-term weather. Of course, just looking at the sky you can’t compete with meteorologists forecasting with super-computers and satellite images, but the sky can often be a better indicator of what’ll happen where you are in the next hour than your weather forecast, which still has difficulty with timing the exact arrival of a weather front.

Another reason to engage with the sky and clouds is your well-being. Having your head in the clouds helps you keep your feet on the ground. Spotting a remarkable cloud or finding yourself looking up at the sky is like a fleeting moment of meditation that’s outside of your control. You can’t plan when you’ll notice something interesting in the sky. You have to be prepared to stop what you’re doing to be able to appreciate the sky, which can remind you that we’re not in control of the planet. In that regard, cloudspotting can act as a reminder to reconnect and not be egotistical.

Clouds move in a graceful manner. Observing their movement slows us down, opens space in our minds and allows it to go into idle mode. That’s a place in which the brain can become quite creative, because more subconscious processing happens allowing the brain to form connections between ideas that aren’t logically sequential. And that is the basis for creative leaps and combinations of ideas. Device culture has meant we don’t allow much time in our day for this idle mode of the brain, so it’s valuable to do cloudspotting as it legitimises doing nothing for a few moments.

3. What was one your most memorable cloud encounters to date?

A long time ago, around the time of starting the Cloud Appreciation Society [in 2005], I went on a trip to Northern Queensland in Australia because I was interested in a rare cloud formation you can find there. It is a very dramatic example of a volutus cloud, or roll cloud, which is like a long horizontal tube that travels along like a wave. You can see the formation elsewhere, but this one is incredibly dramatic. It’s called the Morning Glory cloud, stretches [a distance equivalent to] the length of Britain and can been seen from satellites. It’s also very attractive for glider pilots who surf it like regular surfers would ride waves.

At the end of September and in October, when I went, it’s fairly likely to form, but I was there for two weeks and it took quite a long time till I saw it, which was nerve-wracking. 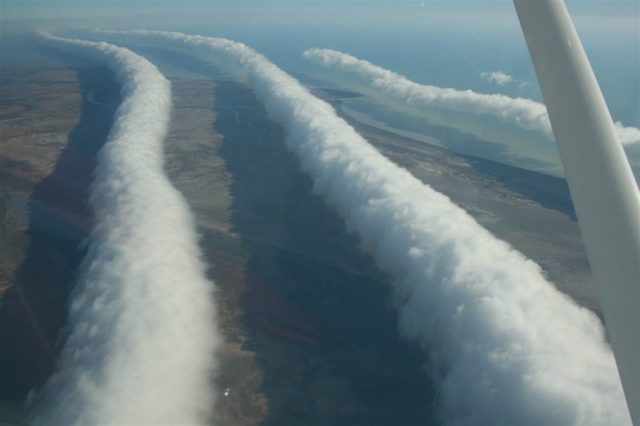 4. You wrote several books on clouds, and also one on waves and one on the ukulele. Is there a connection?

Seemingly not, but yes there is. The easier connection is between clouds and waves. You see many waves up in the sky. The atmosphere is an ocean of gases, rather than liquid, but it behaves like an ocean of water in many senses. In this ocean of air, waves form and travel, often invisibly, but sometimes they interact with clouds and the clouds render the air movements visible.

Looking at it the other way around, waves on an ocean can feel rather like clouds in a sense, because they are also slightly contradictory odd things. When someone looks at a Cumulus cloud, they feel like it’s a thing or an object, but of course it’s not. It’s a collection of tiny objects, these being water droplets or for higher clouds ice crystals. And it’s that array of tiny droplets close together that appears to us as a thing. 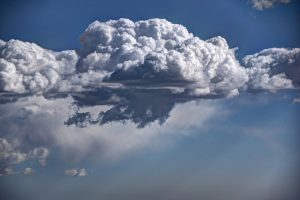 That’s also why young children are always fascinated by clouds. They wonder if clouds are things or not, and how they stay up. It’s also why Leonardo da Vinci called clouds ‘bodies without surface’.

Also, both are aspects of nature that are so every-day and omnipresent that people take them for granted, are blind to them. We only really think of ocean waves, but there are many more types of waves: sound waves; stadium waves; rain waves; waves of traffic. All of those types appeared in my book.

With the ukulele I was taking time to noodle around. I can’t do much of that these days, because I’m quite busy with the CAS. I value time that isn’t focussed on a task or aimed at achieving something specific. The ukulele is an instrument that’s quite easy to play and it’s kind of comical in appearance and connotations, both of which makes you relaxed about practising it. It doesn’t feel so much like you’re learning to be a virtuoso performer.

5. What advice or tips would you give cloud appreciators?

1. Don’t feel like you have to go somewhere special.

Your back garden or back yard may be the best place. The sky generally comes to us. What matters is actively cultivating an attention to the sky. We may be creatures of the ground and evolutionary our attention was on the ‘down here’, but we live in an ocean of air and can inhabit the sky. Engaging with the sky is to lift your perspective – literally and metaphorically. It’s something you have to remind yourself to do, something to make a habit of. Do it every morning, do it as you go for a walk. Spend a few minutes observing. It might not happen when you’re in a hurry.

2. Don’t feel discouraged if you don’t see the dramatic formations we feature on the CAS website, our Cloud-a-Day app, or in our books.

There, we pick the most dramatic skies and find reference images, in which the cloud type dominates the sky so that it’s really clear what its defining characteristics are. But actually, most of the time you don’t have one formation dominating the sky like this – certainly not in Western Europe, where much of our weather coming in from the Atlantic leads to mixed skies. 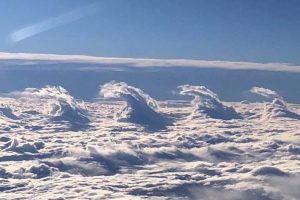 Wherever you’re near an ocean you get maritime weather with lots of simultaneous cloud formation at different altitudes. It’s within larger continents, where the lower air is drier, that you more often get a single cloud formation dominating the whole sky. Somewhere like the UK, a lot of formations happen at once.

If you’re interested in learning about and spotting different cloud types, look out for formations in just a patch of sky. An example might be a cloud formation known as fluctus which looks like a series of breaking waves. Its undulations curl over at the top like ocean waves. It’s rare to see dramatic examples of this fleeting formation and so it is easy to feel that you’ll never see clouds like that, but actually you might see the single curl of a fluctus feature along the top of a basic everyday Cumulus cloud. When a crosswind blows above Cumulus in the right way, it can create one or two of these curls.

It might be rare and difficult to spot clouds dominating the sky, but you can see exotic and unusual formations in what at first glance might seem like everyday skies – that is, if you’re taking a moment to pay attention to what’s happening.

Thank you for speaking to us Gavin!

The Cloud Appreciation Society organises Sky Holidays, which Melanie has been part of on several occasions. Find out about everything the Society offers and become a member on the website.