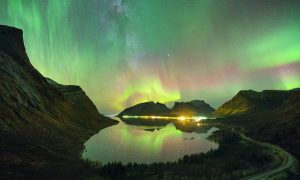 Aurora and milky way over the beautiful Bergsbotn, taken from the viewing platform. Photo: Adrien Mauduit.

Adrien is an aurora guide at the Aurora Borealis Observatory on Senja island in Norway. He’s also an accomplished night sky photographer.

We asked him five questions about being an aurora guide and night sky photographer.

1. What does a typical day as an aurora guide and photographer look like for you?

As an aurora guide at the Aurora Borealis Observatory, I mainly focus on explaining the beautiful phenomenon to our guests. However, my job also includes a lot of unsuspected tasks like taking care of our three young reindeer, driving people around our beautiful island of Senja on day trips or even teaching people how to take pictures of the night sky. 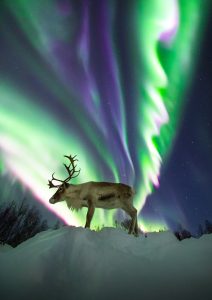 Reindeer under the aurora. Adrien took this lucky shot at the observatory as their resident reindeer was posing without moving as a colorful aurora exploded overhead. Photo: Adrien Mauduit.

As a part of this very diversified position, I absolutely love interacting with people and being outside most of the day. I usually start around 9-10 am in the morning to shovel snow around the property and tidy it up. During the day I work a bit on my social media pages, drive our guests to the grocery store, interact with the those remaining on the property and feed the reindeer. I’m also in charge of welcoming new guests and showing them around the observatory up until our last arrival at midnight.

As soon as it gets dark, I am always on high alert for aurora. Senja island is located in the middle of the auroral zone. We usually see aurora every night if it is clear, as we don’t need a lot of input from the Sun. Colorful substorms can happen unannounced so I monitor the sky and the local magnetograms as often as I can to notify our guests if something turns up.

On some evenings, I organize aurora talks in our tipi while waiting for the aurora. The rest of the time I hang about explaining the fascinating story of the aurora and the myths and legends it contains.

I usually go to bed around 2-3 am in the morning and there is not a lot of private time left, so I use most of it on resting. It is quite a tough job as I don’t have many days off and I work a solid 10 to 15 hours a day, but it is so rewarding. I work the aurora season from September till April, after which I take a well-deserved vacation. During the rest of the year, I travel to different world destinations to take pictures and time-lapses of the night sky, which I sell on my website Night Light Films as a second source of revenue.

2. What fascinates you about the aurora? 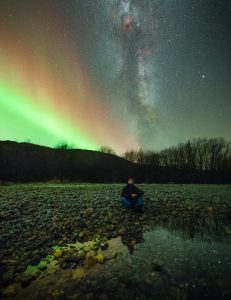 Adrien and the night sky with northern lights and stars.

Of all the night sky phenomena visible from our planet, the aurora is probably the most spectacular. From the fast movement of its dancing pillars to the incredible range of colors you can actually see with the naked eye when it is bright enough, the aurora has always intrigued and baffled me.

I started chasing the aurora about 10 years ago when I was residing in Denmark and even back then I was mesmerized by it. But it wasn’t until Iceland that I saw the ‘real’ overhead aurora, the one everyone talks about. I just stared at my first corona [overhead aurora] and almost cried.

In my opinion the most fascinating thing about the phenomenon is the fact that no two spectacles are the same and you never know what to expect. It may seem frustrating to some people who travel to see the lights and miss it, but I personally love the adrenaline of the waiting phase. It’s especially true when both weather and aurora forecasts are looking grim, and then at the least expected moment the sky instantly lights up in unimaginable shapes and colors. I love the fact that there is still a great deal of mystery and magic in the aurora.

3. What was your most special aurora experience to date?

As I love all the hundreds of displays I have seen through my career, it is hard to select the best. However, there is one time that stands out since it is the one that made me move permanently to Senja island.

I was shooting a time-lapse movie in Abisko, Sweden, in 2017 and was treated to five days of clear sky and gorgeous aurorae. I was supposed to stay longer but halfway through that stay, I received an email from Ander Hanssen, the owner of the Aurora Borealis Observatory, inviting me to visit Senja island and the observatory.

On my first day on the island, I drove up to the northern fjords because a CME [coronal mass ejection] was about to hit Earth. It started as a band in the south already visible at 5 pm, which I had never seen before. Around 6 pm, the band exploded and expanded into a bright and colorful corona. And another one. And another one again! 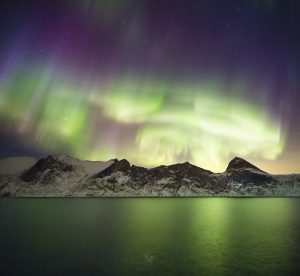 Aurora pillars over Mount Segla on Senja. The aurora is reflecting in the deep-sea water of Mefjord. Photo: Adrien Mauduit.

The sky didn’t even go into the typical recovery phase after the expansion of the substorm, it just kept on delivering fast moving pink bands. I was struck by how much light the aurora can produce as it kept illuminating the fjords all night until 3 am. All in all, I had just witnessed about 10 back-to-back coronas rich in colors and fast swirls. It is a picture I will certainly always remember! The next day I visited Anders at the observatory, and when asked if I was interested in working as an aurora guide on Senja, I instantly said yes. The remaining 4 nights did not disappoint either and comforted me in having made the right decision! What a show it was.

4. You’re writing a book at the moment. What can readers expect? 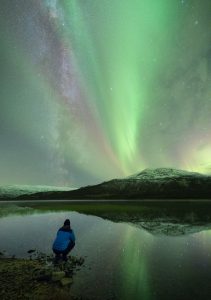 Adrien and the night sky with northern lights and stars.

I am currently writing an e-book dubbed ‘The aurora chase: the ultimate guide to experiencing the lights’. It is divided into three main chapters and is a very practical guide. As interesting as it is, I didn’t want to linger too much on the historical or societal facts about the aurora as there are plenty of very good books about that. I was more interested in bringing my real field experience to people wanting to undertake their first aurora chase.

Throughout the book I attempt to debunk a lot of myths about aurora chasing. In the meantime I try to answer the most frequently asked questions in a very didactic and simple way, like ‘what is the best time of year, what is the best place, can you see colors with the naked eye, does the Moon affect the aurora, how far south can I see the aurora?’

The book also covers the do’s and don’ts of aurora monitoring, forecasting and nowcasting while in the field. More and more people travel to see the lights, yet a lot of them fail because of mistakes that could have been avoided by knowing simple facts in advance. The book really prepares people to what and how they will see the aurora. The e-book also contains self-made media like explanatory movies and interactive figures for those who, like me, have a more visual memory. The book will be available later this year as a digital copy and I am also looking into publishing it in paperback.

5. What’s your best tip or recommendation for aurora fans? 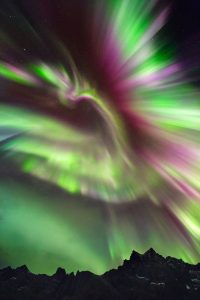 The order of the Phoenix. Adrien took this lucky shot last year as a bright corona exploded above him at Mefjorvær on Senja. One of the frames of the timelapse set up in portrait orientation looks like a giant phoenix rising from the mountains. Photo: Adrien Mauduit.

The best tip that I can give to any aurora amateur or chaser regardless of their experience is one that is highlighted many times in my book: The best way to see the lights is to have patience and accept the fact that it is an elusive natural phenomenon.

There are ways of maximizing your chances (which I develop in my book) but do not give up if you do not see it the first time, especially in this period of solar minimum where activity is low.

If you are chasing the lights at high geomagnetic latitudes (a lot of polar regions like northern Norway, Sweden, Iceland, Alaska or northern Canada), do not follow the Kp index or the Kp forecasts as it actually is the worst index for aurora chasing. Space weather is already very hard to forecast with precision more than about an hour before it hits Earth, so don’t spend your money on expensive aurora chasing trips solely based on aurora/Kp forecasts. Just take a chance, go outside, be patient (don’t go to bed at 10 pm) and you will eventually succeed in seeing this breath-taking phenomenon.

Thank you, Adrien! We wish you good luck with the e-book and will be looking out for its publication.

Visit https://auroraborealisobservatory.com/ to explore the Aurora Borealis Observatory and book your trip.

Are you baffled by some of the terminology Adrien is using? Are you wondering what coronal mass ejections and the Kp index might be?

In her book “Aurora: In Search of the Northern Lights”, Melanie combines the science behind the lights with a travelogue as she pursues the aurora across the northern hemisphere – from the Arctic Circle to Scotland.