An art exhibition associated with the recent film Loving Vincent is now open in Athens. Loving Vincent is the first feature-length animated film painted entirely in oils, and tells the life and death of Vincent Van Gogh. Each of the film’s 65,000 frames is an oil painting on canvas, using the same technique as Van Gogh, created by a team of 115 painters. It was written and directed by Dorota Kobiela and Hugh Welchman and was released worldwide in 2017.

Val Fulford, one of the film’s artists, shares her thoughts on painting the aurora in Van Gogh’s style for the Athens exhibition. She took inspiration from videos of the northern lights by Maciej Winiarczyk.

“I did three paintings with the modern theme of photos from space and the night sky. I was thinking of what Vincent might have wanted to paint in our modern age of available images from other parts of the world, space and beyond. We have access to so many images in our modern age.

One of the paintings is of the “Aurora” because surely he would have been fascinated by it had he lived long enough to travel to other parts. Even if Van Gogh had not travelled himself farther north, Maciej’s videos of the Aurora would have surely intrigued him as they have me.”

The northern lights painted in the style of Van Gogh by Val Fulford.

Val also made two other paintings for the exhibition, both based on photos taken from space from NASA archives. One is of a hurricane over the Caribbean and the other of a Mars ‘scape.

The theme of the exhibition is Van Gogh revisited. It is open from the 1st to 29th December at Technohorus Gallery, 4 Lebessi, Makrigianni, Athens 117 42, Greece. 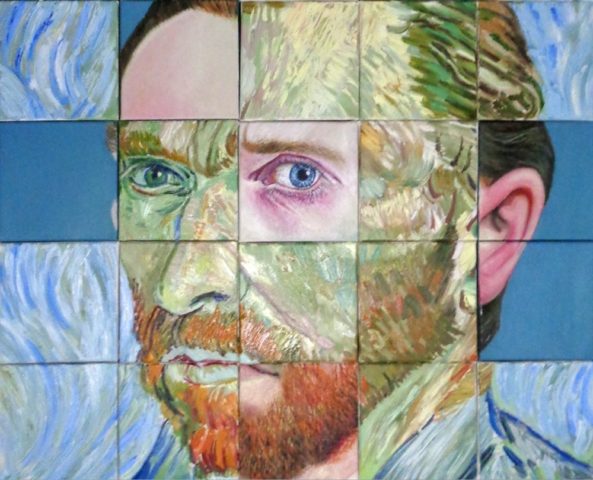