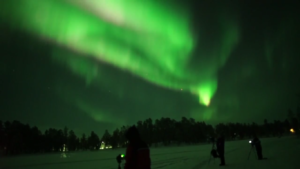 More and more people are photographing the aurora borealis, but cameras are now good enough to even capture video of the aurora as it swirls and dances in the night sky. Richard Jenkinson, member of Wycombe Astronomical Society, recently filmed the northern lights in Nellim, Finland. In this blog he shares his top three tips on how to best capture the northern lights on camera.

Video: A real-time video of the Northern Lights in Nellim, Finland, captured by Richard Jenkinson on the night of 26th December 2017. Richard uses Sony a7S with a wide angle lens.

1. Set up before you start

Check your batteries and bring spares. Set the manual focus, lock the shutter and let the cameras do their work.

“I have learnt over the few years of taking photographs of the aurora not just to view the display through the camera, but to watch and enjoy the actual display. Otherwise all you see of the aurora is when you review your photos or film footage!” 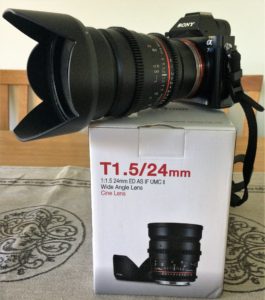 Richard uses Sony cameras, a Sony a77V and a Sony a7S. He shoots at 25fps. Both cameras have live view on the screen, which is helpful for keeping an eye on what the camera is recording.

2. Keep an eye on the cameras and adjust them from time to time

“Of course, you do need to check in on your cameras.”

Video: A real-time video of the Northern Lights in Nellim, Finland, captured by Richard Jenkinson on the night of 26th December 2017.

In this video you can see that the aurora was very bright at the beginning. Richard realised then that at around 50-60000, the ISO was much too high and turned it down to 30-40000.

3. Wear very good clothing, boots and gloves and keep spare batteries warm inside your down jacket

“Standing on a frozen lake in -25°C can cause problems!”

Richard has suffered frost nip to two fingers, but luckily, he was only uncomfortable for about a week and then fully recovered. He now uses the rechargeable electronic handwarmers by HotRox.

The lockable electronic shutter release cable may freeze, but it still functions well. You can consider using a Sony remote control, so that you can just point and switch the camera on and off.

“You need a lot of luck when filming aurora. Luck and patience.”

The night of 26th December 2017 Richard was filming in North Finland at 68.5 degrees north.

“The forecast was low, but there was a very large coronal hole. The aurora started slowly with just a curve in the sky. We could see it building, then it suddenly exploded and continued for an hour to a very fast-moving dynamic display.”

To help with your luck and avoid spending long nights freezing in the wrong place, the Live Aurora Network have set up a network of Sony A7SII cameras around the Aurora oval across Iceland that constantly stream views at 30fps when the Aurora is detected. The team have developed technology that detects not just the aurora, but also how strong it is and how long it is likely to go on, so that local aurora enthusiasts can choose to travel to one of the camera locations and aurora fans from all over the world can watch live wherever they are.

Have you attempted capturing the aurora on camera? Share photographs and videos with me on social media or submit your own Aurora Story for the blog. I look forward to seeing your results.

If you’re curious to learn more about the science behind the aurora, I provide expert information about the aurora.