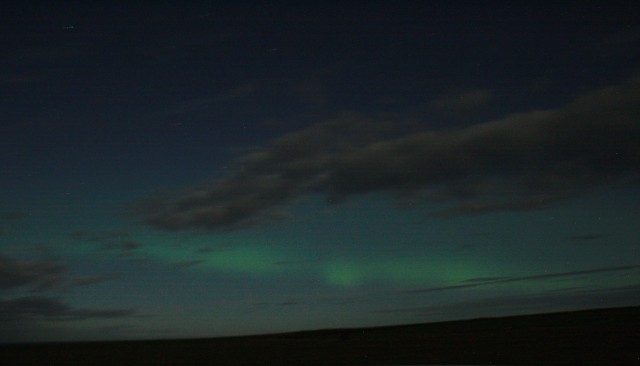 Northern Lights over Orkney on a cloudy, moonlit night.

We were visiting friends in the north of Orkney in August. We had been talking about the northern lights and the fact that we had never seen them. As we were leaving, our friends said that there could well be an aurora in the sky at that time, but that the conditions were too poor to actually see it – there was still the glow of twilight and the full moon was in the sky. So were the clouds.

But my daughter thought she could just make out a curtain of green. It seemed as though she was right. We drove half a mile away from the streetlights and, sure enough, there was indeed a wispy green glow, coming and going. Not easy to see, but the camera caught more than our eyes could. Just a shame we weren’t prepared and had to hand-hold the camera, propping it as best as possible on the roof of the car for a 10-second exposure…