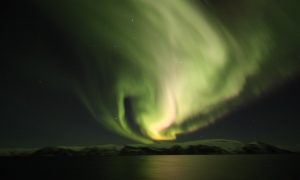 In November 2019 I experienced my first northern lights cruise. I flew into Tromsø and boarded the Hurtigruten ship MS Finnmarken as it travelled up to Kirkenes and back, joining a 50-strong group who were on a full Astronomy Voyage from Bergen to Bergen, which included talks from astronomer Graham Bryant and guided tours with tour leader Eva Stiegler.

Seeing the aurora on a cruise is different to seeing it on land, and it brings its own advantages and challenges. To explore these, I spoke to Graham and Eva to get their views and tips. 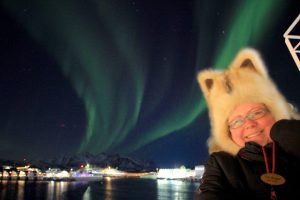 Eva Stiegler is a tour guide on the Hurtigruten Astronomy Voyage. 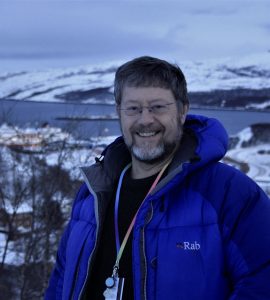 Graham Bryant is an astronomer giving talks on the Hurtigruten Astronomy Voyage. 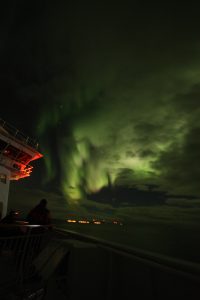 Graham: “When you are on land you tend to be fixed in a particular place so you are subject to the vagaries of the local climate and local weather. Also, you have to wait for the aurora to come to you, so to speak. When you’re on a ship you’re moving up and down through the auroral oval so you increase your opportunities of seeing something. And you can move in and out of bad weather.”

Eva: “One of the negatives is that taking pictures of the aurora is much more difficult. On land you can get away with having a decent camera, but on a ship you need a really good camera to take very good shots on board.”

2. How should aurora travellers prepare for a northern lights cruise?

Eva: “Wear warm clothing and bring really good footwear and preferably spikes* for the shoes if you want to go out walking anywhere. In the northern parts of Norway temperatures are changing up and down, so you’ll go from snow to thaw to ice, and it can get really slippery. Even on the ships it gets icy.”

* Ed: These are small metal chains attached to rubber that can be stretched easily around a boot to provide extra grip.

3. When photographing the aurora from a ship, are there any specific considerations?

Things to bring for photographing northern lights from a ship

Eva: “You need a camera on which you can control both ISO settings and the exposure. This is important. You need a DSLR and a tripod. It is also a good idea to have some kind of weight for the tripod because it can get windy.”

Graham: “Or you could use a camera holder that can grip the ship’s rail instead of using a tripod, though you may get some vibration from the ship. However, often in the fjords it can be quite smooth.”

Eva: “But if you’re going to use the railing as support, always watch out for the camera. Keep it attached around your neck. You don’t want it to fall!”

Graham: “It can also be useful to have a cable release or self-timer so that the camera can become stable before taking the photos.”

Eva: “And if you want to take a lot of pictures then it might be helpful to have a battery pack. Or at least some spare batteries, because batteries run down a lot faster in the cold.”

Camera settings for photographing northern lights from a ship

Eva: “You need to set the ISO to 12500 or above. On land you could probably get away with an ISO of around 1600 because you can set the exposure length to 20 seconds or so. On the moving ship if you use a shutter speed of more than 4-6 seconds it’s not going to give you a good picture—you’ll just get lots of blurred stars.”

General considerations for photographing nothern lights on a ship

Graham: “Keep in mind the wind and sea spray and choose your position carefully.”

Eva: “And if it’s very rough then listen to tour leaders’ recommendations. Think about your own safety.”

Graham: “When you’re on land you have plenty of space. When you’re on a ship and the aurora is visible then you’ll get a lot of people crowding a comparatively small space. So you need to be mindful of where your camera is and where other people are. People may step in front of you, or kick the tripod, or accidentally use their flash*.”

4. Finally, what are your aurora cruise highlights?

Eva: “I think it must be one of the cruises we did together. In December 2018 I experienced one of the best displays ever. It started around seven o’clock in the evening, if not earlier.”

Graham: “I saw it starting when I was coming back from the North Cape excursion, in the twilight, low level. And then at 7pm it just exploded.”

Eva: “It was absolutely amazing. It was all over us, both sides of the ship. We had coronas above our heads. It had pinks in it. I remember catching myself jumping up and down like a little child and I don’t do that very often!”

Graham: “Even the crew were coming out to look. And if the crew come out, then it must be special.”

Thank you Graham and Eva.