In January 2015 I finally managed to fulfil one of my travel dreams – to see the northern lights. In honesty, I was nervous about the trip since I’m more of a villa, pool and pile of books kind of person than an activity enthusiast, particularly in temperatures of -20C. But my boyfriend was interested in the activities on offer (which included skidoo trips, husky sledding, ice fishing, reindeer farms and skiing), and I wanted to see the aurora, so we went for it.

My boyfriend and I booked the trip through The Aurora Zone, which offers a variety of trips ranging from serious trekking to more restful activities. We opted for a five day holiday in Luosto in Finnish Lapland, staying in a hotel but with activities laid on.

We were warned it would be cold, so took the usual kit for a skiing holiday. However we still weren’t prepared for quite how cold it was. On our first day the company provided us with even more kit: boilersuits to put over our salopettes, thermals and ski jackets; extra socks; boots and gloves. It turned out that for the temperatures in Finland, our kit was the equivalent to wearing shorts and t-shirts. 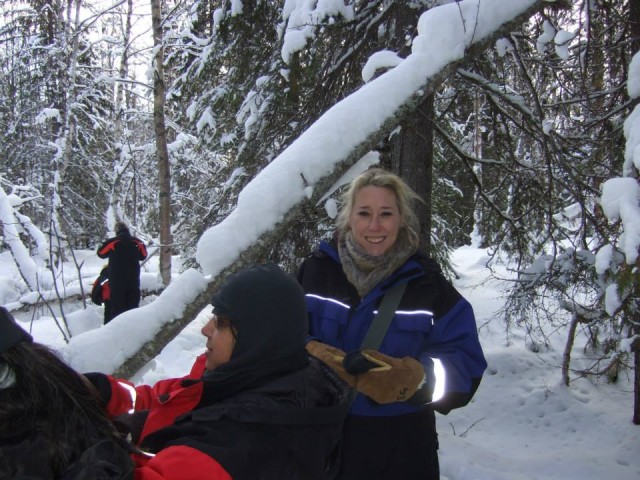 Out in the Lapland forest wearing all our clothes and more.

We took a skidoo to the reindeer farm, travelling across frozen lakes where arctic hares were happily bouncing around. Then we went on a reindeer ride. Our reindeer was named Lazy, which turned out to be quite apt – he was much slower than the others!

That night after dinner we took a walk around the frozen lake by the hotel. It was dotted with spotlights replicating the colours of the Northern Lights, which, while not the real thing, were beautiful. When it started snowing it was magical.

Over the next few days we took part in different activities. I remember the husky sledding was good fun. The dogs go much faster than you think, but luckily that my boyfriend was alive at the end of my turn in charge of the sled!

On the penultimate night we were taken to a nearby lake for ice fishing, then to a hut right next to the lake where the team cooked over an open fire. After dinner and a few drinks everyone warmed up – particularly after coffee we were instructed to put cheese into… It was surprisingly good actually! Each of us were given our own wooden mugs as gifts, which we branded as ours. The Finns believe that when you are given this kind of mug, it remains yours and if you drink out of anyone else’s or if anyone else drinks out of yours, the drink won’t taste as good. 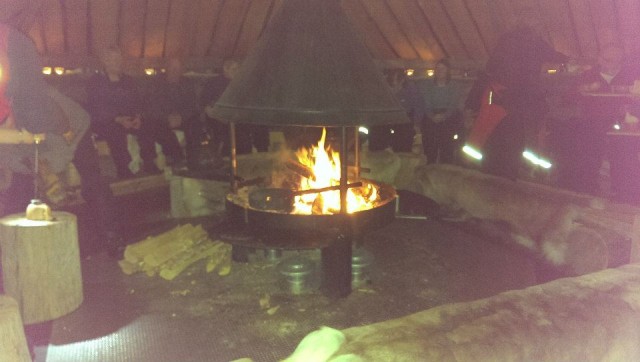 Sitting around the fire drinking (cheesy!) coffee in Lapland.

By this point in the trip, while we’d had an amazing time, we still hadn’t seen the Lights. This was disappointing for me and it was becoming less and less likely, the staff said, warning us that the lights hadn’t made an appearance for about a month as the weather and solar conditions weren’t right.

On the last day, the sun finally came out and the guides took us out on the skidoos to go up the mountain. We hadn’t been able to go before as the visibility had been so bad. It was a truly amazing experience. As we wound our way through the forest, the snow got deeper. The trees were drooped with the snow, which made them look like otherworldly sculptures. It was breathtaking – just writing about it makes me feel quite emotional as I don’t think I’ve experienced a view like it before or since. 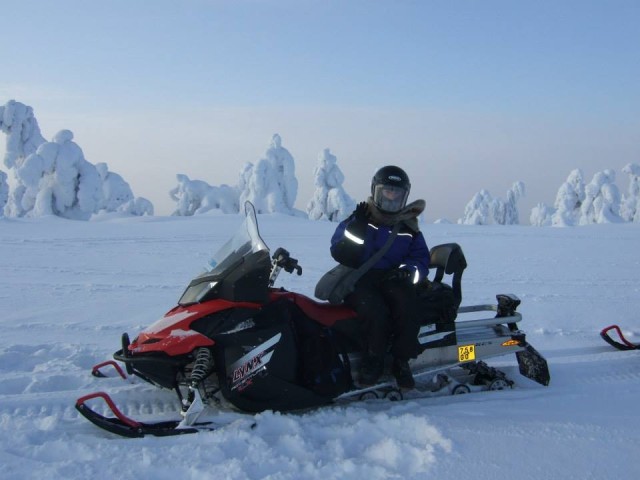 Out on a skidoo ride in Finnish Lapland.

Later over dinner the northern lights alert beeper we were given went off. My boyfriend wasn’t too thrilled when I dragged him off halfway through dinner to put on outdoor clothes, but when we went outside he forgot all about dinner. We stood on the frozen lake and watched the aurora lighting up the sky – greens and pinks moving across. Suddenly it didn’t really matter how cold it was. It was an amazing sight and it finished our trip off perfectly.

NEVER take your gloves off – you’ll never feel your hands again!
ALWAYS wear at least two more pairs of socks than you think is reasonable. Actually, just wear a lot more clothes than you think you’ll need.
Coffee with butter is quite good.
Activity holidays are actually really fun and I enjoyed stepping out of my comfort zone. Even if the Lights hadn’t made an appearance, it would have been a magical trip. Just go, it’s amazing!