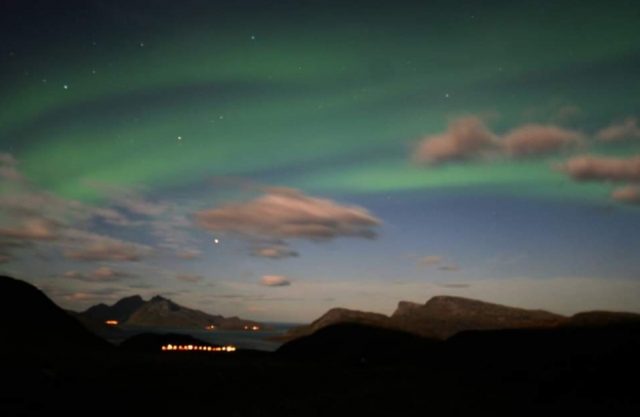 One can only see major fault lines in a marriage in hindsight, I guess. An odd opener to an Aurora Story, right? Fear not, my hook here is not an attempt to connect ionization of charged particles whose trajectories have been changed by the magnetosphere to human relationships. That would obviously be silly. It’s why astrologers don’t just go down the bookies.

My 40th birthday, 6 years ago. What do I really, really want to do? See the aurora borealis. But how, exactly?

I wasn’t particularly well off. The only affordable flights were from a new airline, Norwegian Air. But Norway is extremely expensive, especially for hotels, and £200 per night for nights when I wouldn’t actually be there? No thanks, I’m from Liverpool. This would need to be done Scouse style: Arctic camping in October.

I suggested the idea to my then-wife. She wasn’t keen. Would she mind if I did it solo for 3 nights? Yep, sure, go for it, she said with a note of relief.

Car hire is daft cheap these days, and thus reasonable even in Norway. £160 for 4 days, just a compact. I landed at sunset in Tromsø and had my first epiphanic experience: no little cars were available, so they upgraded me, for free, to a saloon big enough to fit my inflatable lilo with the back seats down, rendering the 1kg one-man bivvy in my hand luggage rucksack redundant.

Directly from the airport I drove to a car park at the top of a small lake called Sorvatnet off the Fv58, overlooking the fishing village of Ersfjordbotn, and looked northwest.

You could see it side-eye, where the retinal rods are tuned for scotopic (low light) vision. One thing I never appreciated from the YouTube videos is how slow the aurora “flows”: like a lava lamp, not the turbulent rapids of speeded-up time-lapse videos. 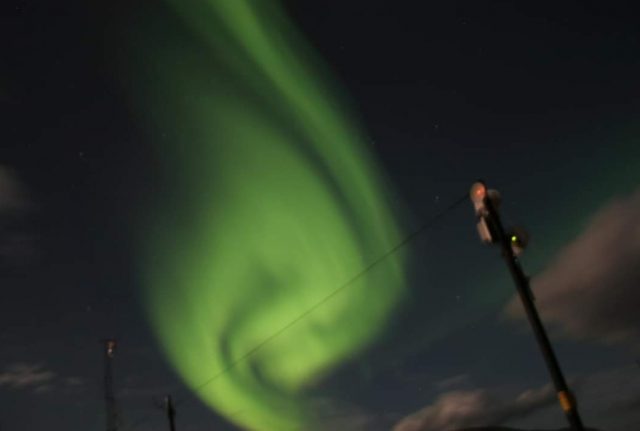 I had a tripod and a proper Arc’teryx coat, but the Arctic wind blew ever harder, colder and noisier while the space wind blew silent in its vacuum. The aurora increased noticeably every few minutes. Earth weather and space weather met in serendipity. I got some decent 30-second exposures of aurorae which were barely visible in plain sight. And then it happened.

There is no prediction of this stuff. Imagine a flag flapping in the wind: it might have some kind of average periodicity of flapping, but it is impossible to predict when a particular gust might cause the flag to furl in on itself. Suddenly, there it was.

A bright green eddy. Not just rods this time, cones activated, proper phenotypic vision. I took a photo, admittedly a crap one. The tripod was shaking, as were the telegraph poles, as were my hands. But I didn’t care.

I swore, softly. Look. At. That. The closest an atheist can come to divinity. And I only left the airport two hours ago.

I kept watching. A hip flask of Laphroaig kept me warm for another hour, but the space weather had peaked. Am I allowed to sleep in the back of a car after drinking? I don’t know. The Earth wind bit, but its teeth were blunted by the metal chassis.

I slept well. What to do today? I fancy a mountain. Not a craggy Lord of the Rings job, maybe a nice Welsh walk.

Tronstaldtinden: Led Zep, Yes, Björk’s Hyperballad at the summit. I’m back at the car, jelly-legged, eating half a kilo of dry roasted peanuts: dining like veritable royalty. Where now?

Here is where Scouse Style kicks in. The Radisson Blu Hotel in Tromsø does proper aurora bus tours, using live updates, but they are hellishly expensive. So I’ll just follow the bus in the car, yeah?

I did so for an hour or so, to the evident consternation of the driver, but it became clear that they were heading to Finland and I was knackered and stinky. I pulled into Hatteng services for a shower and watched a duvet of cloud pull up to cover the mountains; no soft swearing tonight. Some teenage boys dressed in camo gear remark upon my proper arctic sleeping bag in the back of the obvious hire car and ask me who I am. Aurora tourist mate, problem? No. Lilo sleep. 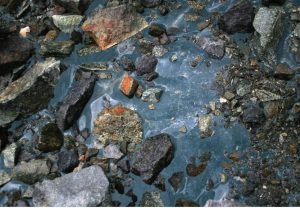 Suddenly I hear a vehicle accelerate hard and then skid. Other camo guys jump from the back of an army jeep and shout at the teenagers I met pointing Heckler & Koch semis at them. They make them lie face down on the tarmac, still shouting. If they execute them they sure will kill any witnesses. Do I dive into the fjord? Bullets from a shallow angle bounce off water. I cannot believe I am thinking about this.

A screech of tyres signals the Jeep’s departure. I wipe a tiny hole in my breath’s condensation on the car window and peer out. The teenaged boys are stood laughing. I am livid.

“Oi! Was that training exercise or what?”
“Haha, ya, sorry man”
“You could’ve told me you knobheads!”

There is nothing more amusing than a bald white man who feels he has been wronged. More Nordic laughter.

The day dawns cloudy and cold. I notice I have lost weight on a diet of water, fruit, and nuts with a harsh exercise regime. 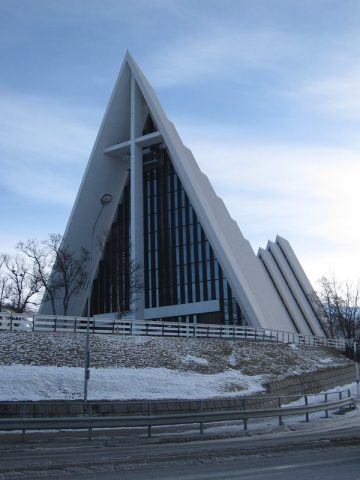 The Arctic Cathedral, Tromsø. Photo by: Bernt Rostad, CC BY 2.0

It’s a few miles walk from the road to Steindahlsbreen glacier. The path would be hard to follow without the tell-tale red ribbons tied to trees, typical Scandi pragmatic creativity. Two Muse albums and an encounter with a herd of wild reindeer bring me to the glacier. A poignant metal sign some 200m from the edge states where the edge was a decade ago.

Another epiphany: I had no idea that glacial ice was blue. The air in a room, or the water in a bath, is a little bit blue. But you need miles of air, or metres of water, for the colour to appear, and imperfections in ice usually render it opaque. The perfectly crystalline blue ice is effectively only visible now because glacial retreat is so rapid.

Earth weather forecast for the night was good, space weather forecast less so. As the sun set, I explored Tromsø itself and found my favourite building in the world: The Arctic Cathedral. If I had infinite money I would buy it and lie in bed watching the aurora through the glass gaps between each triangular section.

I returned to the Sorvatenet car park of the first night hoping for another epiphany. No luck. I drove down to Esfjordbotn for the possible 1 am peak; the aurora was visible but not dramatic. This is the key to aurora hunting: assume continual disappointment.

I returned home thinner, exhausted, exultant. I tried to tell my then-wife what I had seen, done, thought, felt. The conversation shut down within two minutes, and we divorced within two years. Physicists can be passionate about things that other people find a bit weird, I guess.

For more stories like this, visit the Aurora Stories page.