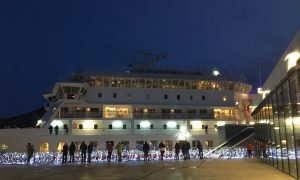 Last month, I got a short taster of Hurtigruten’s Astronomy Voyage. The cruise starts and ends in Bergen: over 12 days it takes you along the Norwegian coast – its 34 ports, more than 100 fjords and 1000 mountains. I didn’t join the entire cruise, but flew into Tromsø and boarded MS Finnmarken as it travelled up to Kirkenes and back.

What’s particularly interesting about this cruise, in addition to taking you through mesmerising landscapes, is that it’s accompanied by experts who hold lectures about the northern lights, the Arctic sky and the solar system. This tour was joined by astronomer Graham Bryant, Chairman of the Clanfield Observatory in Hampshire and Fellow of the Royal Astronomical Society. Also, if the northern lights don’t make an appearance during the cruise, Hurtigruten promise to give guests another 6- or 7-day Classic Voyage free of charge.

Each day when the ship docked there was the possibility of taking an excursion of local interest or to take a local walk around the town or to a nearby viewpoint. I enjoyed getting outside and stretching my legs. In the evening, of course, we watched for northern lights or the clouds clearing.

View of the ship and Honningsvåg from above.

On my first day, we visited the planetarium in Tromsø. The next day, the ship docked in Honningsvåg and a small group of us went for a nice hike up the nearby mountain in the couple of hours of daylight available to us. We ended the hike at two o’clock in the dark. 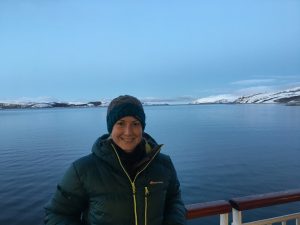 When it’s light enough to see them, you get beautiful views of the fjords. For any excursions, make sure to have good boots and to be wrapped up warm when going outside! In Hammerfest, we took a walk up through fresh snow to a viewpoint above the city.

I thought back to when I was there in 2014 in the company of a Norwegian friend, Cecile. Back then, I had just had the idea for my book, Aurora: In Search of the Northern Lights, but no idea yet of the adventures, friendships and joy I would have in writing it and in all the related interactions since. 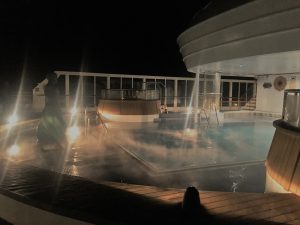 Following our hikes, we could spend some time in the sauna and jacuzzi on deck.

On my last night, the aurora made an appearance straight after dinner. I spent hours standing outside and looking around as the ship sailed calmly through the fjord towards Tromsø (preferable to the previous night’s rough open sea).

It was a fairly average display but I enjoyed standing out on deck, wrapped up warm, as we gently sailed through the smooth fjord, past the low mountains, towards Tromsø. It was pretty and, as usual, I felt gratitude to be treated to an appearance of the aurora.

We arrived in Tromsø for a midnight concert at the cathedral—singer, pianist and flautist—which was a beautiful, lyrical, lilting end to a lovely trip. 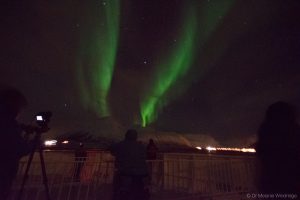 My first aurora on a ship. It’s a slightly blurry picture as I didn’t bother to unpack my tripod and opted to mostly just watch and enjoy instead.

This trip gave me a lovely taste of Arctic Norway and I even got a chance to speak to astronomer Graham Bryant and tour leader Eva Stiegler about seeing the aurora on a cruise. It’s different to seeing it on land, and it brings its own advantages and challenges. Watch this space for the interview. We’ll publish it in the new year.

Have a lovely Christmas and Happy New Year!